Steak Diane Sauce is a creamy mushroom gravy, spiked with Cognac or Brandy. Poured generously over steak, tastes amazing with potatoes too! An excellent sauce over Garlic Mashed Potatoes, Grilled Chicken or for dipping Potato Wedges. You can't go wrong with this tasty sauce.

What is Steak Diane?

Diane Sauce also known as Steak Diane, was popular in American restaurants in the 1940's and 50's. A mushroom gravy sauce that's served with your steak, which is flambéed (lit on fire). It was popular to have it flambéed table-side in a restaurant for dramatic effect.

There are a few theories as to where Diane Sauce came from. The popularized American version originated from New York, commonly thought to be created by a person called Nino of the Drake (from the Drake Hotel). His real name was Beniamino Schiavon, and he was an Italian immigrant.

How to Make Steak Diane Sauce

Prepare all the ingredients in advance. After your steak is done cooking and is resting, you can prepare this mushroom sauce. This way, you aren't tempted to rush your steak resting time ensuring a juicy steak.

Can I Use Brandy Instead of Cognac?

Yes. Brandy and Cognac are basically the same thing. Cognac comes from a specific region of France and is made under specific rules. All other copycats are called Brandy. As you burn the brandy down, the differences in quality of Cognac or Brandy won't matter as it mixed with the food. So it's ok to buy the cheap stuff.

If you don't have Cognac or Brandy, substitute with Port Wine (which contains brandy). It won't flambé with port, just let it simmer for the alcohol to cook out. This way you preserve that Steak Diane taste.

Can You Make Steak Diane Sauce in Advance?

Yes. This is a great steak sauce to make in advance. Keep it in the fridge for 2 or 3 days, and just reheat on the stove.

Cognac adds great flavor to this sauce. The alcohol burns off during the cooking process. However, if you don't want any alcohol in it, use beef stock instead.

What Other Sauces Go With Steak?

Modern food has gotten trendier. It's way too cool for a delicious, buttery, mushroomy, calorie-laden gravy sauce. Not considered a fancy dish anymore, but boy, is it worth making. This Steak Diane Sauce is a rich and indulgent steak sauce is one of my favorite retro sauce recipes. Bon Appetit! Приятного аппетита! 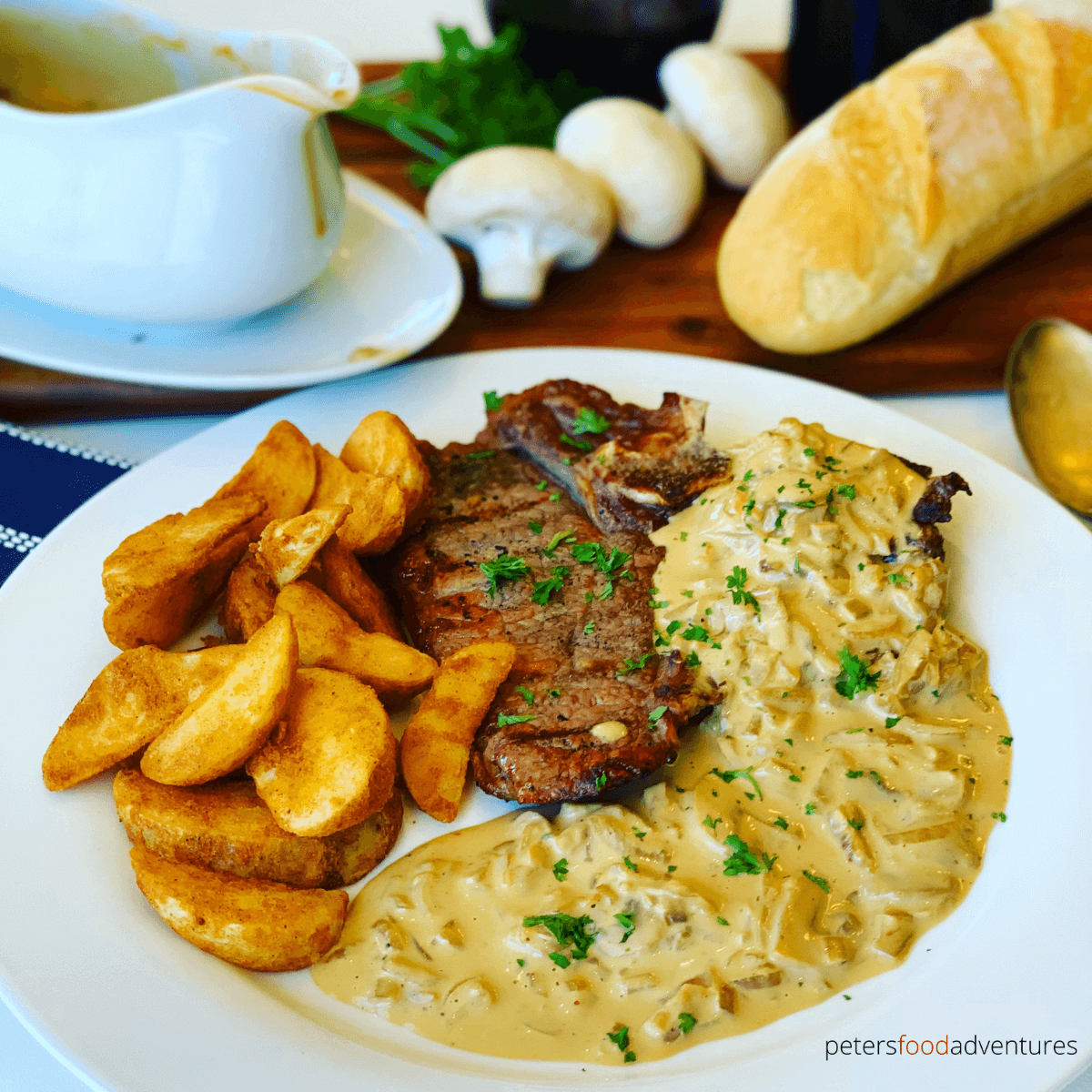 This website uses cookies to improve your experience while you navigate through the website. Out of these cookies, the cookies that are categorized as necessary are stored on your browser as they are essential for the working of basic functionalities of the website. We also use third-party cookies that help us analyze and understand how you use this website. These cookies will be stored in your browser only with your consent. You also have the option to opt-out of these cookies. But opting out of some of these cookies may have an effect on your browsing experience.
Necessary Always Enabled
Necessary cookies are absolutely essential for the website to function properly. This category only includes cookies that ensures basic functionalities and security features of the website. These cookies do not store any personal information.
Non-necessary
Any cookies that may not be particularly necessary for the website to function and is used specifically to collect user personal data via analytics, ads, other embedded contents are termed as non-necessary cookies. It is mandatory to procure user consent prior to running these cookies on your website.
SAVE & ACCEPT
3960 shares