An Asian Salt and Pepper Shrimp recipe that's crispy, a bit spicy and totally addictive. The best part is that there is no shell on the shrimp! Easy to make, even easier to eat! Tossed in green onions, chili peppers and garlic. Enjoy as an appetizer, or just for lunch!

Salt and Pepper Shrimp is a favorite dish found at many western Chinese restaurants. It's a quick and delicious, and perfect appetizer or snack. My brother asked about this recipe, as he recently ordered it in a restaurant and loved it. My local fish and chip shop makes a delicious Salt and Pepper Squid, which is what I based my recipe on.

Traditionally, Chinese Salt and Pepper Shrimp is made with shrimp or prawns with the shell on. This recipe's different and you're going to love it!

My Chinese Salt and Pepper Shrimp recipe doesn't use flour, instead uses potato flour or potato starch. You could substitute with corn starch, but I always use potato flour over corn starch. I find that it makes my gravies less lumpy as it thickens at a lower temperature compared to flour or corn starch. I always have it on hand. Don't substitute with flour. That's the secret to crispy fried food. Potato starch always gives the fried shrimp a crunchier texture. Plus it makes this a gluten free shrimp recipe for everyone to enjoy.

I don't know about you guys, but I hate peeling shrimp, especially cooked shrimp. This crispy shrimp recipe is cooked without the shell. It's the fastest way to eat shrimp, a lot of shrimp quickly. There are many Asian prawn recipes out there that look beautiful on the plate, but they use unpeeled prawns (with shells), making it hard and messy to eat. Restaurant kitchens like making shrimp with the shell on because it's easier for them. Food leaves the kitchen faster, but it leaves you with the mess of peeling the shrimp!

Can I Use Cooked Shrimp?

Nope! Make sure you buy raw shrimp, called green prawns in Australia. Peel and de-vein them if necessary. Don't use already cooked shrimp, which looks pink and already boiled, which will taste awful. Raw shrimp sometimes costs a bit more, but it's worth it for the difference in taste! You can buy frozen shrimp, and that works great for this recipe. Just defrost before using!

How to Make Salt and Pepper Shrimp

This Salt and Pepper Shrimp No Shell recipe, reminds me of a version of Asian Popcorn Shrimp, but much tastier. Some people say Red Lobster invented Popcorn Shrimp in the 1970's. It's popularity spread around the world. There are a few differences between the two recipes.

Popcorn Shrimp is often dredged in egg and flour before being deep fried in oil. My Salt and Pepper Shrimp recipe is fried in a hot wok using less oil, no egg and no flour. Plus it's tossed in garlic, chilli peppers and green onions, so it's taste much better than plain popcorn shrimp!

Sauce for Salt and Pepper Shrimp

I think everyone knows I love sauce in everything! Being a crazy sauce guy, I usually dip these fried shrimp into some my favorite sauces. Check them out.

I love eating this meal. It's supposed to be an appetizer, but I sometimes eat it for lunch or dinner. Once you start, you won't be able to stop (or share). A tasty appetizer for Chinese New Year that everyone will love. Bon Appetit! Приятного аппетита! 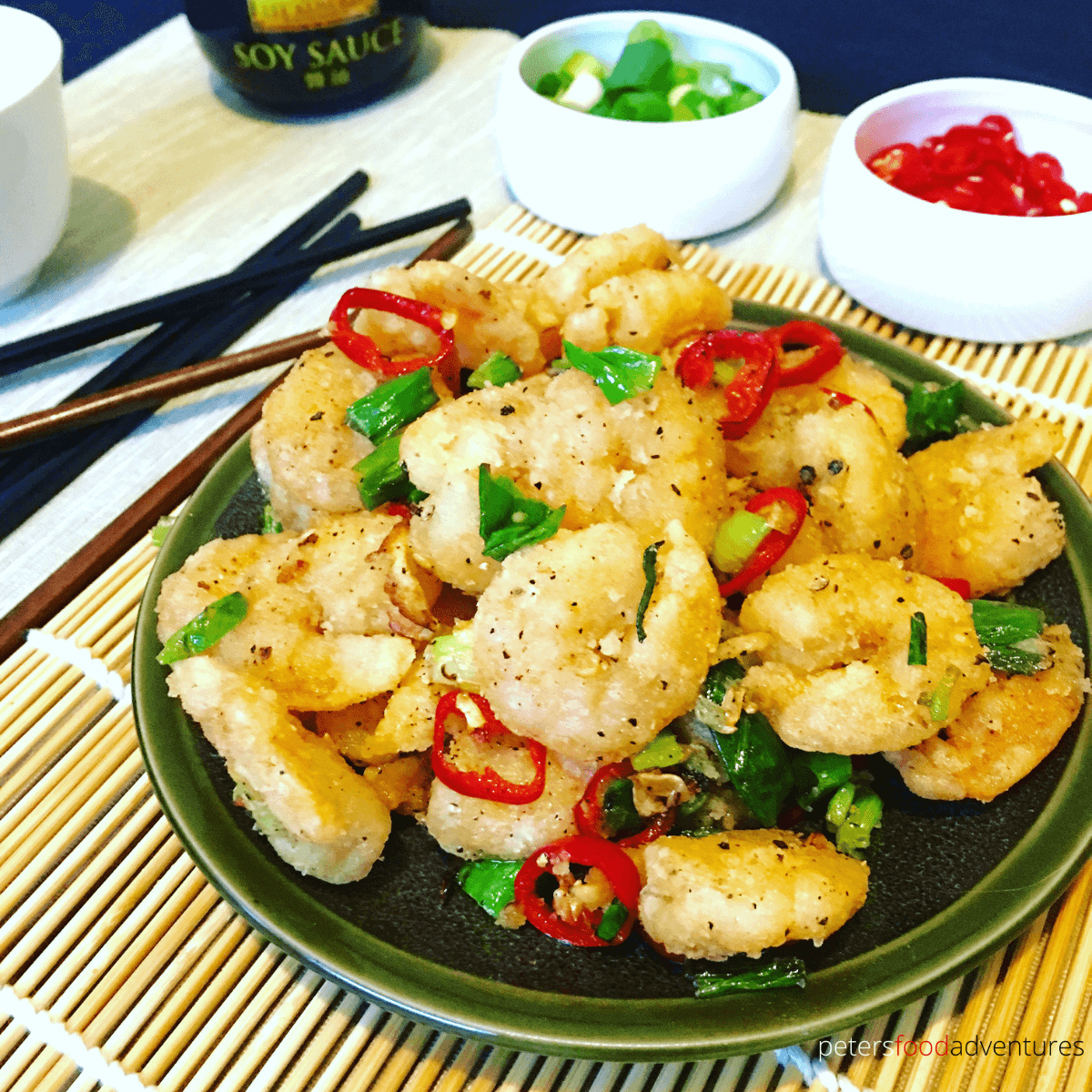 This website uses cookies to improve your experience while you navigate through the website. Out of these cookies, the cookies that are categorized as necessary are stored on your browser as they are essential for the working of basic functionalities of the website. We also use third-party cookies that help us analyze and understand how you use this website. These cookies will be stored in your browser only with your consent. You also have the option to opt-out of these cookies. But opting out of some of these cookies may have an effect on your browsing experience.
Necessary Always Enabled
Necessary cookies are absolutely essential for the website to function properly. This category only includes cookies that ensures basic functionalities and security features of the website. These cookies do not store any personal information.
Non-necessary
Any cookies that may not be particularly necessary for the website to function and is used specifically to collect user personal data via analytics, ads, other embedded contents are termed as non-necessary cookies. It is mandatory to procure user consent prior to running these cookies on your website.
SAVE & ACCEPT
2032 shares