This 'Russian Tea Recipe' is the name of an American citrus spiced tea , which is popular around the holidays, as are most spiced drinks, but you don't need to wait for the holidays to have this tea.

There are many variations of this recipe, most of them using a dried powdered mixture of instant tea, Tang orange drink, and spices. You might see recipes on Pinterest that make tea mixtures that you prepare in pretty jars in advance. Whilst a mixture like that is convenient, I'm going to make a real steeped tea with real fruit and spices. Nothing artificial in this recipe.

Is this tea even Russian?

No! This tea recipe is actually not Russian in origin at all, but an American invention. Russians love their tea and are amongst the worlds largest consumers of black tea, which is surprising to some people. You can combine the per capita tea consumption of Canada, Australia and the USA to equal what Russian consume annually. So it's a bit confusing for some people who think that this tea recipe from Russia. It's not. Russians often drink their tea with a slice of lemon, which is where the Russian-ness of the recipe could be from.

This popular recipe isn't often found in stores or restaurants, but is more commonly found in cookbooks or made at home. I think the Tang drink company did very well with marketing the powdered version of this tea recipe. As Tang isn't available in Australia, I make this healthier version which I think tastes better too.

How to Make Russian Tea

The way that Russians prepare black tea is different from most cultures as well.  Loose leaf tea is brewed in a small teapot, to make a concentrated tea, which we call Zavarka (заварка). The zavarka is poured into individual cups, then topped up with boiling water to the top. That way you can then control the strength of your tea. A Russian samovar, which literally means self boiler, was traditionally used to boil the water. So this is what I think of when I hear people say they want to make Russian Tea.

However, this American spiced tea is a winter favorite for me. An easy mix of teabags, lemons, oranges, cinnamon, cloves, and nutmeg. I used 3 medium oranges, or use 2 large ones. This creates a fantastic citrus flavored tea beverage. Boil the citrus and spices for about 5 minutes. Add in the teabags and allow to steep. Strain, sweeten and serve, it's that easy!

Russian Tea made without Tang, and definitely not Russian. But maybe just don't tell anyone and enjoy. It's so easy to make. Bon Appetit! Приятного аппетита! 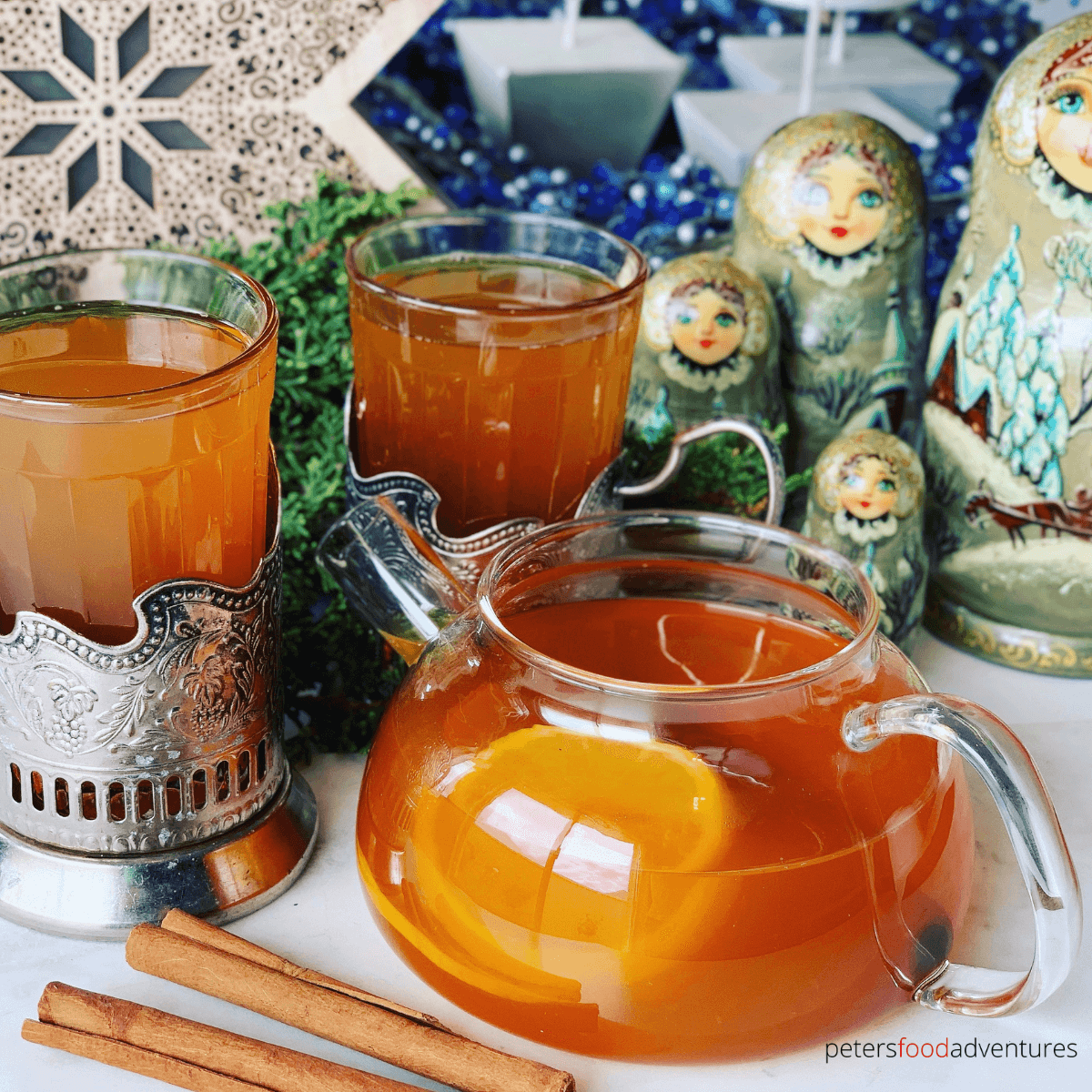 This website uses cookies to improve your experience while you navigate through the website. Out of these cookies, the cookies that are categorized as necessary are stored on your browser as they are essential for the working of basic functionalities of the website. We also use third-party cookies that help us analyze and understand how you use this website. These cookies will be stored in your browser only with your consent. You also have the option to opt-out of these cookies. But opting out of some of these cookies may have an effect on your browsing experience.
Necessary Always Enabled
Necessary cookies are absolutely essential for the website to function properly. This category only includes cookies that ensures basic functionalities and security features of the website. These cookies do not store any personal information.
Non-necessary
Any cookies that may not be particularly necessary for the website to function and is used specifically to collect user personal data via analytics, ads, other embedded contents are termed as non-necessary cookies. It is mandatory to procure user consent prior to running these cookies on your website.
SAVE & ACCEPT
14380 shares