Radish Salad is a staple on the Russian summer table. I grew up with a very large vegetable garden, filled with plenty of radishes, cucumbers, onions, dill, plus every other vegetable imaginable. As a result, there were always lots of vegetable salads we ate in the summertime.

Radishes aren't that popular in western cuisine, and I don't know why. They're very healthy for you. They're a good source of vitamin C. A ½ cup of radish gives you about 30% of your daily intake. The best thing about radishes is that they are low calorie. How low? A ½ cup of sliced radishes provides about 12 calories. That is for plain radishes. Don't worry, we will add the fat content shortly!

If you dis-like the sharp flavor of radish, the sour cream will mellow out the sharpness in this salad. It's the perfect dressing for radishes. I think this salad tastes best with sour cream, try my homemade sour cream if possible. However, if you are worried about the fat content, you can substitute with Greek Yogurt. It has a lower fat content and is higher in protein compared to sour cream. Or just use a low fat sour cream. But the hero of this recipe is that amazing radish crunch. It's so satisfying to crunch through an easy 4 ingredient radish salad.

I love growing radishes, it reminds of my childhood garden. All home grown veggies taste better. Radishes grow very fast in the garden, you can get several crops across the summer, and are an easy organic crop to grow with so many varieties. It takes about 4 weeks from sowing to harvesting fresh radish.

The other part of this salad is the cucumbers. We buy Long English Cucumbers, or Lebanese Cucumbers here in Australia work well. But growing up, we grew and ate different types of cucumbers. They're known as bush cucumbers, and aren't as long and smooth as varieties you buy in store. They are like the cucumbers you use for making dill pickles. Sometimes they can be a bit bitter, so we would peel the bitter skin off the cucumber before eating them. Either variety works great in this Cucumber Radish Salad with dill. Try some different varieties at your local Farmer's Market.

How to make Radish Salad

Russian Radish Salad only has a few ingredients. Slice the radishes and cucumbers the same thickness. By that, I mean thinly slice them! Add some freshly chopped dill and mix in sour cream as the salad dressing. Salt and pepper to taste and you're done. Sometimes I will add some finely chopped green onions, but that's not the usual way of making this Radish Salad.

So enough of the gardening lesson, this is a super easy salad to throw together in a few minutes, full of vitamins, and so very Russian! And don't forget about the amazing crunch! Bon Appetit! Приятного аппетита! 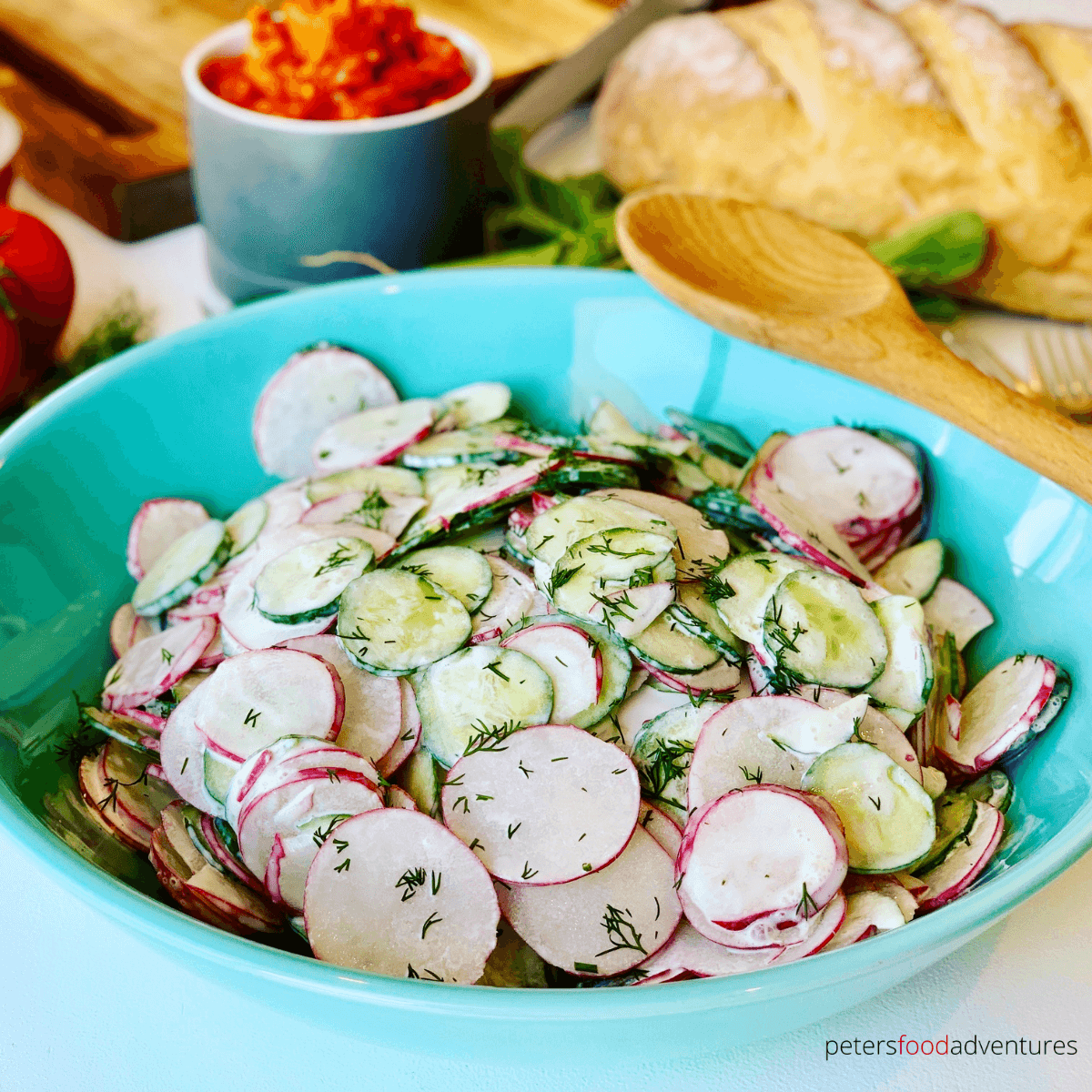 This website uses cookies to improve your experience while you navigate through the website. Out of these cookies, the cookies that are categorized as necessary are stored on your browser as they are essential for the working of basic functionalities of the website. We also use third-party cookies that help us analyze and understand how you use this website. These cookies will be stored in your browser only with your consent. You also have the option to opt-out of these cookies. But opting out of some of these cookies may have an effect on your browsing experience.
Necessary Always Enabled
Necessary cookies are absolutely essential for the website to function properly. This category only includes cookies that ensures basic functionalities and security features of the website. These cookies do not store any personal information.
Non-necessary
Any cookies that may not be particularly necessary for the website to function and is used specifically to collect user personal data via analytics, ads, other embedded contents are termed as non-necessary cookies. It is mandatory to procure user consent prior to running these cookies on your website.
SAVE & ACCEPT
5720 shares