This Pumpkin Leek Soup is heartwarming and easy to make. Perfect comfort food for autumn and winter, this soup is naturally thickened with potatoes, flavored with leek and spices like cumin and turmeric. This is an Australian favorite!

As soon as autumn arrives, this Creamy Pumpkin Leek Soup is a family favorite. Here is Australia, pumpkins are usually served as a savory dish, and pumpkin soup is very popular. Sold in cafes, restaurants, and even Campbell's Soup sells it in every supermarket. However, homemade pumpkin soup always tastes better!

Try to use the freshest ingredients when cooking to ensure maximum nutrients. You can use store bought broth or stock cubes for an easy shortcut, but Instant Pot Bone Broth always tastes best.

What Pumpkin is Best for Soup?

You can use any hard pumpkin when making pumpkin soup, but avoid varieties that are 'stringy' like Spaghetti Squash. For obvious reasons, they won't blend well in the soup.

Stick Blender or Immersion Blender is the only appliance you'll need for this recipe. It's easy to blend all the ingredients while still in the pot, saving you extra washing time. If you don't have a Hand Blender, then you can transfer the soup to a traditional blender and blend in batches.

How to Peel a Pumpkin

The hardest part of making Pumpkin Soup is peeling the pumpkin. Don't be fooled by the Jamie Oliver nonsense that you can eat the pumpkin peel in the soup.

Using a sharp knife, cut the pumpkin into quarters or wedges. Carefully slice the peel away from the pumpkin, taking care not to slice your fingers. Alternatively, you can roast the pumpkin and the peels remove easily.

How to Thicken Pumpkin Soup

Some people thicken soups and sauces by adding cornstarch mixed with water. Whatever you do, please do not do that! This recipe uses 3 medium potatoes to thicken the Pumpkin Leek Soup. You can also blend a can of Chickpeas with the potatoes to make it even thicker.

This recipe uses milk to make pumpkin soup creamy. It's a lower fat alternative to whipping cream. If you want to use cream, use 1 cup of cream and increase your chicken stock in your soup. Alternatively, you can use coconut milk for an Asian twist.

How to Make Pumpkin and Leek Soup

You'll need a 4½ pound or 2kg pumpkin. By the time you peel and de-seed it, you should have the right amount for this recipe. Leek adds a gently onion-y flavor to the soup. If you don't have leek, you can substitute with an onion instead.

Like all my soup recipes, it's a full stock pot, I'm not going to go through all this work and not have any leftovers! Pumpkin, Leek and Potato Soup that really hits the spot during the colder months. Bon Appetit! Приятного аппетита! 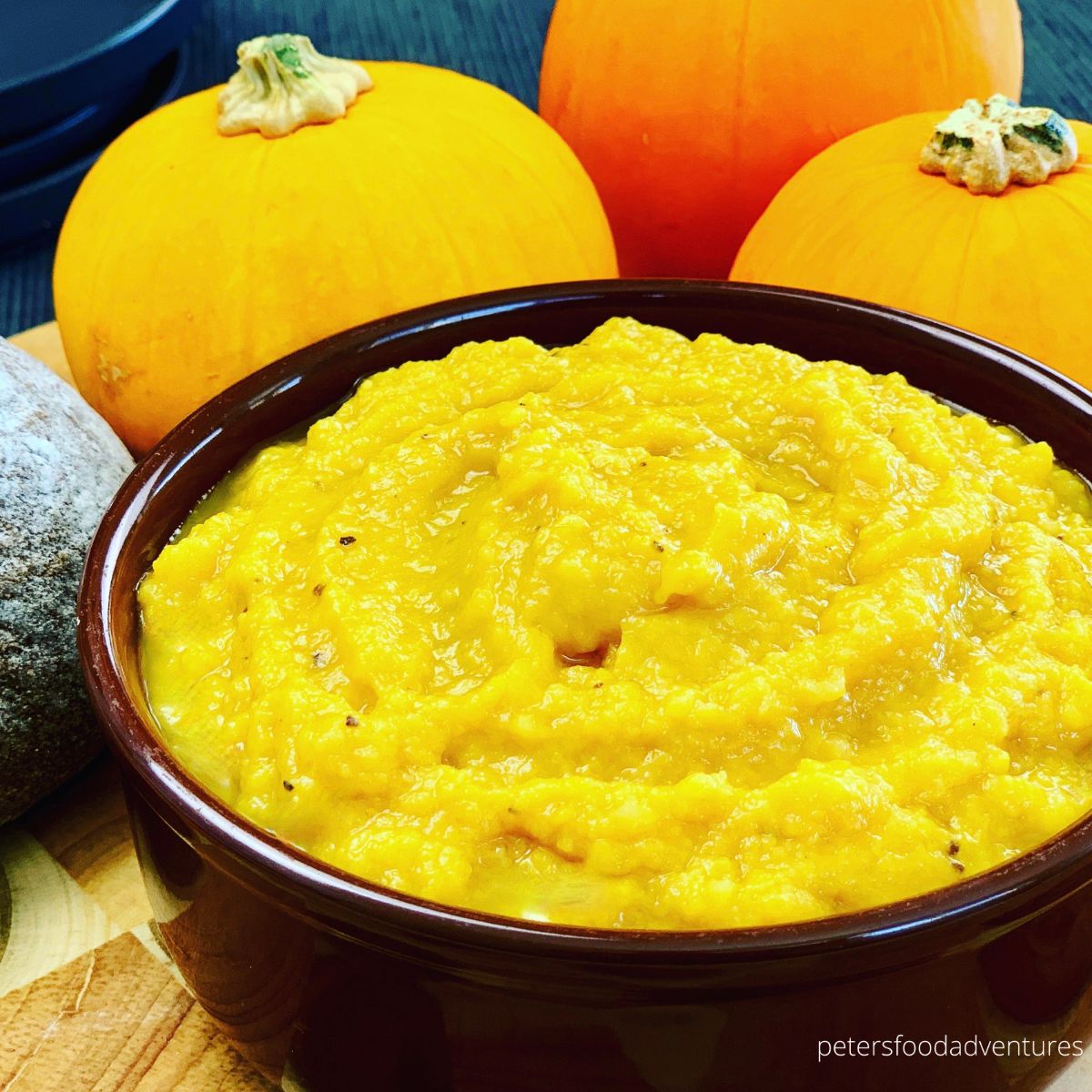 This website uses cookies to improve your experience while you navigate through the website. Out of these cookies, the cookies that are categorized as necessary are stored on your browser as they are essential for the working of basic functionalities of the website. We also use third-party cookies that help us analyze and understand how you use this website. These cookies will be stored in your browser only with your consent. You also have the option to opt-out of these cookies. But opting out of some of these cookies may have an effect on your browsing experience.
Necessary Always Enabled
Necessary cookies are absolutely essential for the website to function properly. This category only includes cookies that ensures basic functionalities and security features of the website. These cookies do not store any personal information.
Non-necessary
Any cookies that may not be particularly necessary for the website to function and is used specifically to collect user personal data via analytics, ads, other embedded contents are termed as non-necessary cookies. It is mandatory to procure user consent prior to running these cookies on your website.
SAVE & ACCEPT
1059 shares