I love eating Spicy Perogy Pizza, loosely based from delicious Potato Perogies, but on a pizza! It's a carb filled marriage made in heaven! If you're sick of plain boring pizza, try a different pizza recipe instead.

Perogies are a Canadian version of a Slavic dumpling, boiled and stuffed with potato, cheese and bacon, and served with sour cream and onions. There are many variations of these dumplings, in Russian, we called them Vareniki (вареники), Slavs also call them Pirogy, Pirohy, Pierogi. The traditional Slavic recipe isn't stuffed with cheddar cheese and bacon, but definitely served with sour cream and onions. That's why this is a westernized version of the original. Now pairing Perogies with Pizza are a match made in carb heaven, what could be wrong with that!

Perogy Pizza is a spicy pizza with layered potato, bacon, cheese topped with sour cream and green onion. Absolutely delicious, a Canadian classic, based on the recipe from Boston Pizza Restaurant. I know, a Canadian restaurant chain called Boston Pizza! Depending on what part of the world you are from, you may have never heard of Perogies before, certainly not in a pizza form.

How to make Perogy Pizza

First, you need to boil the peel and boil the potatoes, before slicing them to layer on the pizza dough. The secret of the spicy potatoes is boiling the potatoes in cayenne with fresh garlic and onion. You can substitute with powdered onion and powdered garlic, but I think it's better to use fresh. If you don't like it spicy, then just skip the cayenne pepper. Like I said, it's based on the BP's recipe, so it doesn't have to be spicy!

Instead of a pizza sauce base, you spread sour cream on the dough. Then you layer the sliced potatoes over the pizza, overlapping the pieces until the pizza is completely covered. Sour cream is the perfect creamy base that combines together between the dough and sliced potatoes. Then you layer with cheese and generously top with bacon. Finish with sliced green onions. It's the same concept as a pizza, but with a Slavic twist!

You can buy ready made pizza dough, sometimes we buy yeast dough from Costco which works great. If making at home, check out my easy bread maker pizza dough recipe. Just throw in all the ingredients in the breadmaker, and it does all the hard work of kneading the dough for you!

Spicy Perogy Pizza is a Canadian classic, and I recently heard there are versions of this in America too. Dough, flavoured potatoes, cheese, bacon and onions, it's my favorite carb overload. Slather the sour cream over the pizza and enjoy, just like original perogies! Bon Appetit! Приятного аппетита! 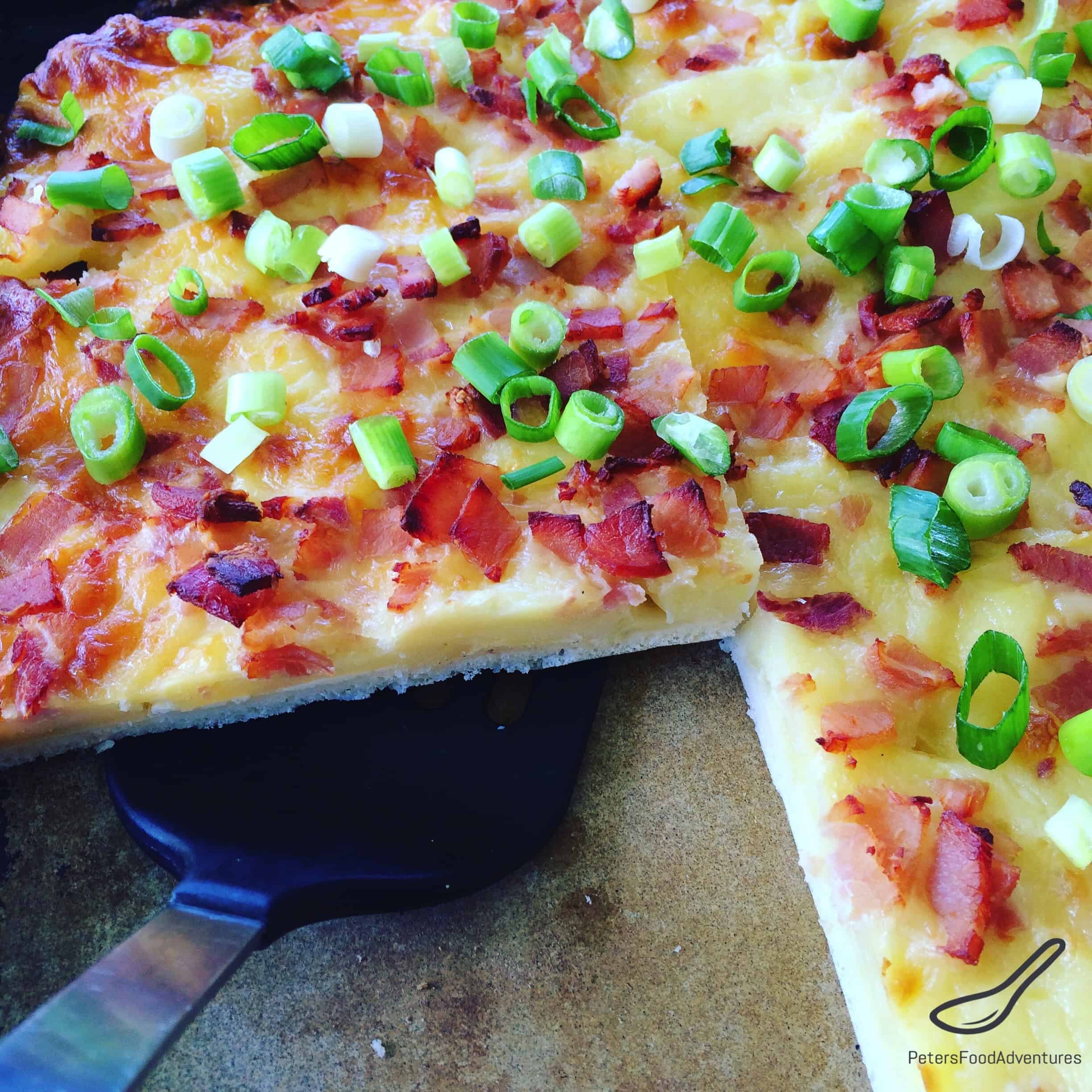 This website uses cookies to improve your experience while you navigate through the website. Out of these cookies, the cookies that are categorized as necessary are stored on your browser as they are essential for the working of basic functionalities of the website. We also use third-party cookies that help us analyze and understand how you use this website. These cookies will be stored in your browser only with your consent. You also have the option to opt-out of these cookies. But opting out of some of these cookies may have an effect on your browsing experience.
Necessary Always Enabled
Necessary cookies are absolutely essential for the website to function properly. This category only includes cookies that ensures basic functionalities and security features of the website. These cookies do not store any personal information.
Non-necessary
Any cookies that may not be particularly necessary for the website to function and is used specifically to collect user personal data via analytics, ads, other embedded contents are termed as non-necessary cookies. It is mandatory to procure user consent prior to running these cookies on your website.
SAVE & ACCEPT
256 shares