Oysters Kilpatrick is a grilled bacon topped oyster dish served in restaurants all over Australia. It's an Aussie classic. Perfect for a country so abundant with fresh seafood.

The Oysters Kilpatrick name is unusual, and the commmon story is that there was an Irish fellow named Patrick who was an oyster fisherman who had a bad heart. One day the oyster haul was so large, that Paddy died whilst trying to haul it into the boat. The local newspaper reported the following day "Oysters Kill Patrick"... Which is kind of a funny story for a recipe, but doesn't explain how the original recipe started.

I had never had cooked oysters on the half shell before I came to Australia. Maybe it was due to the fact that I grew up hundreds of kilometres from the ocean, and the seafood restaurants seemed to sell only frozen seafood. Nothing beats the fresh seafood in the restaurants in Australia. We are so lucky to be surrounded by water, with plenty of fresh seafood, including oysters.

How to eat Oysters

I think the most common way to enjoy oysters is raw, and on the shell. Don't be scared, they are truly delicious! Many people eat them just with a squeeze of lemon, or sometimes with a dash of tabasco. I make fresh oysters a bit fancy with an Asian vinaigrette, drizzled over the oysters. Check out my Asian Dressed Oysters recipe.

There are a few different ways to make this recipe, but I have kept it simple. I learnt how to make this recipe when I worked at a restaurant on the Gold Coast 20 years ago. The chef sometimes added a squirt of tomato sauce (Ketchup) when mixing the Worcestershire Sauce for a bit of extra depth, but that's optional. It's really just a tiny squirt, probably half a teaspoon! You don't want to overkill it with tomato flavor.

Other Oyster Kilpatrick varitations add a squirt of Bbq sauce, Tabasco sauce, Sriracha or Sweet Chili Sauce for a spicier twist. Otherwise you just mix in the sliced bacon with Worcestershir sauce, spoon on the oysters and you're ready to grill! It's that easy.

It only takes 5-10 minutes under the grill in your oven. Depends on how thick you cut your bacon, how hot your grill is, how far away your oysters are.... But when the bacon is cooked, you are ready to eat!

Grilled Oysters are usually served on rock salt, and it's more than a pretty decoration. There is a practical reason to place them on rock salt. Because oysters are a shell, they don't sit flat on a baking tray. Filling the tray with rock salt allows the oysters to sit evenly while baking under the grill. The rock salt heats up, but doesn't cook, so it's the perfect way to make grilled oysters!

Usually people serve the hot grilled oysters (and they are very hot) on the same baking tray they grilled it on. So if you want to serve it to guests, make sure your baking tray is clean and something you could serve food from. Sometimes I transfer them to a fresh serving platter with fresh rock salt. You can see in the video below that I used Himalayan Rock Salt, because of the pink pieces of rock salt look a bit fancy. But that's not necessary, you can serve in what you baked it in!

Sometimes you don't think of adding something to a recipe, until you read about it! I've always used either Havarti or Edam, as they melt beautifully and have a buttery smooth flavour. Of course you can use other cheeses, but avoid sharp cheeses with a low melting point.

Why Do I Need Rock Salt When Serving Oysters?

The oysters are grilled and served on a base of Rock Salt. Quite often, you grill the oysters in the same pan that you will serve it in. Not only do the Oysters heat up, the rock salt is also hot. In my video, I served them on Himalayan Rock Salt, but that was just for show (to make it look a bit fancy).

The Oyster shell is uneven, lumpy and slightly pointy. If you grill or serve them without the Rock Salt, they don't sit evenly on your plate. The vinaigrette or toppings will then leak out. The rock salt allows the oysters to grill evenly, and to be served evenly.

Eating Oysters Kilpatrick is how I fell in love with eating oysters, it's an Aussie classic. If you've only had raw oysters, you really must try Oysters Kilpatrick, you won't want to eat your oysters any other way. Bon Appetit! Приятного аппетита! 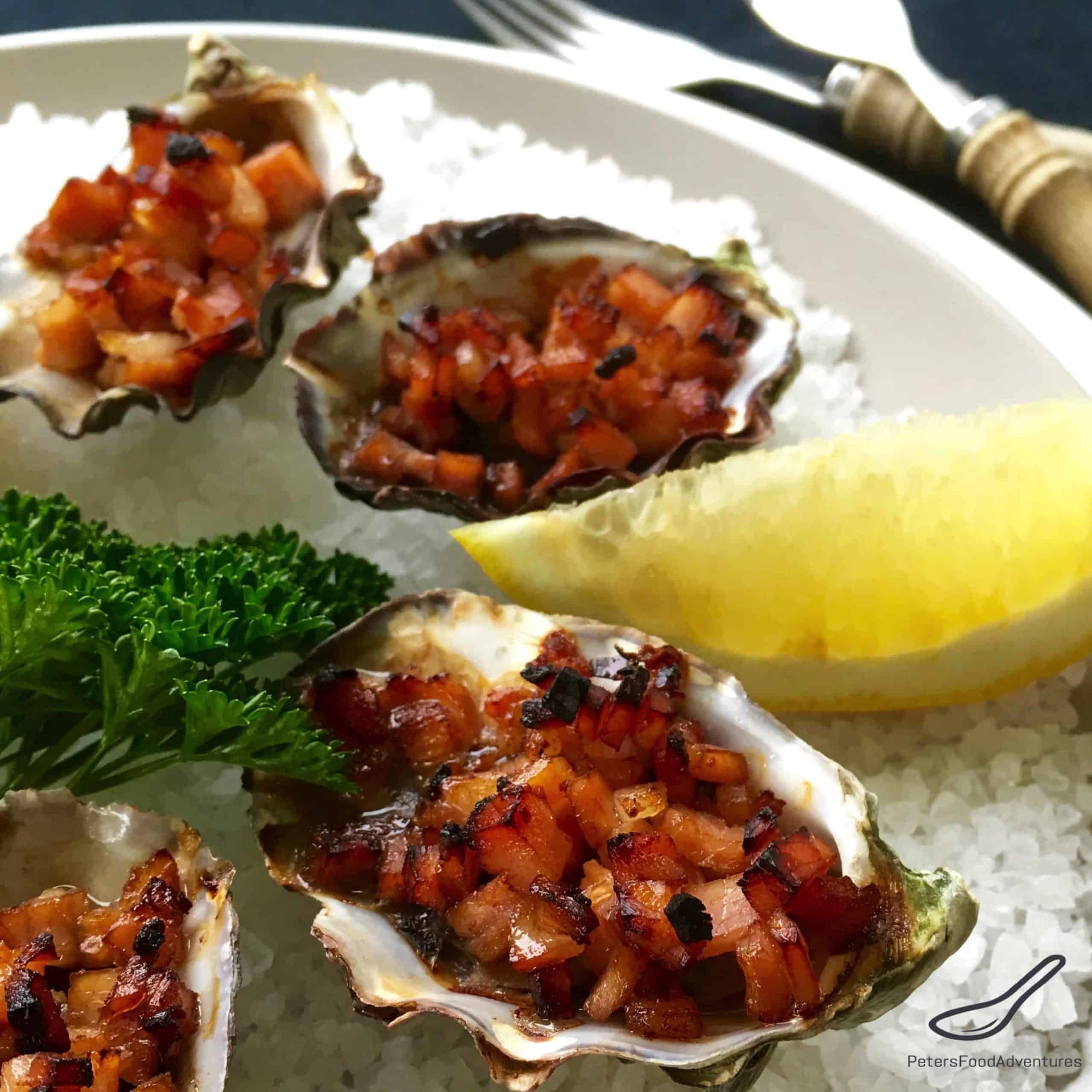 This website uses cookies to improve your experience while you navigate through the website. Out of these cookies, the cookies that are categorized as necessary are stored on your browser as they are essential for the working of basic functionalities of the website. We also use third-party cookies that help us analyze and understand how you use this website. These cookies will be stored in your browser only with your consent. You also have the option to opt-out of these cookies. But opting out of some of these cookies may have an effect on your browsing experience.
Necessary Always Enabled
Necessary cookies are absolutely essential for the website to function properly. This category only includes cookies that ensures basic functionalities and security features of the website. These cookies do not store any personal information.
Non-necessary
Any cookies that may not be particularly necessary for the website to function and is used specifically to collect user personal data via analytics, ads, other embedded contents are termed as non-necessary cookies. It is mandatory to procure user consent prior to running these cookies on your website.
SAVE & ACCEPT
453 shares