Mushroom and Beer Soup isn't a traditional Russian soup, however Russians love all things mushrooms. There are many ways to make mushroom soups with many varieties of mushrooms. When people think of mushroom soup, they usually think of a creamy soup. This is a vegan mushroom soup recipe made without cream, and it's still very tasty.

My first memories of mushrooms came from a book from which we learned to read in Russian from, our Bukvar (Буквар). This was a Soviet state sponsored beginner reader alphabet book. It seemed that the boys and girls in this book always went mushroom picking in the forest. I always wondered where their parents were, and why they were allowed to wander in the Russian forest with all those bears around?

My all time favourite is called Shaggy Mane or Lawyer's Wig which can't be bought in a store, as it needs to be used within hours of picking, so good! They've apparently been introduced to Australia, but I haven't seen any of them growing around me. For this recipe, I just used regular mushrooms that you buy in the supermarket.

Can I Use Dried Mushrooms?

Now beer isn't usually associated with mushroom soup, but I think it goes surprisingly well. Beer is often made with barley, just think of a barley soup, and then you understand how this works in this recipe. Any alcohol boils out and you are left with a subtle barley flavor. If you're unsure, just add half a bottle beer and try it out.

Mushroom and Beer Soup is similar in consistency to Pumpkin Soup, and similar in the way it's blended using a stick blender. I always make homemade vegetable soup stock from scratch because it tastes better and is healthier. You could also make a beef broth as well, but then it wouldn't be vegetarian! Of course it's easier to buy vegetable stock from the store.

This vegan soup incorporates some of the great flavours of Russia; mushrooms, potatoes, barley from the beer, and of course, top it off with thyme and a crusty loaf. Initially I started to make a recipe for Russian Lent, which is supposed to be vegan. I think the beer kind of ruined that idea, even though it boils out. So instead, you get to eat a different type of mushroom soup!

You can't go wrong with this great tasting Vegan Mushroom Soup, something different from the usual. Bon Appetit! Приятного аппетита! 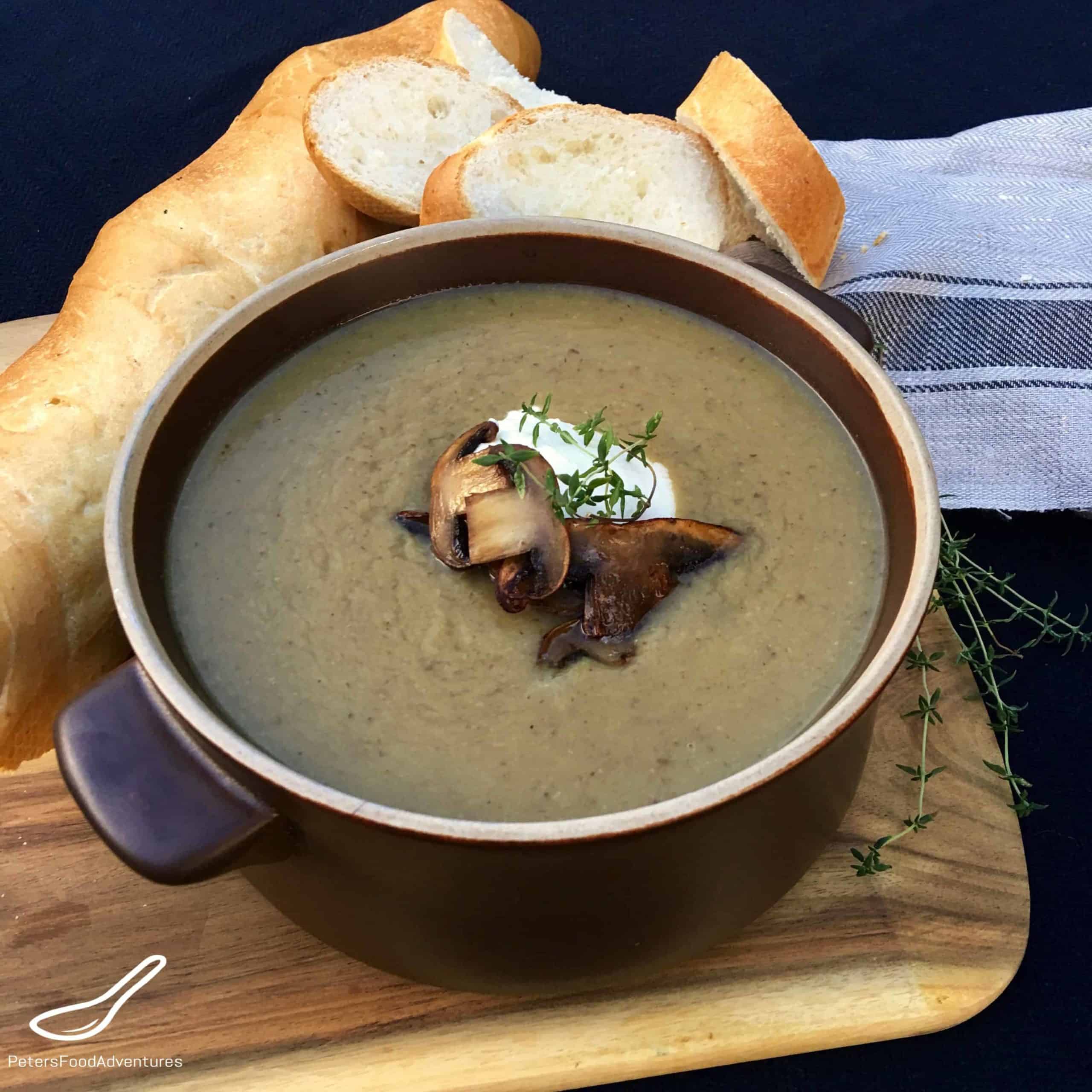 « No Bake Cherry Cheesecake
How to Make Funchoza Salad »

This website uses cookies to improve your experience while you navigate through the website. Out of these cookies, the cookies that are categorized as necessary are stored on your browser as they are essential for the working of basic functionalities of the website. We also use third-party cookies that help us analyze and understand how you use this website. These cookies will be stored in your browser only with your consent. You also have the option to opt-out of these cookies. But opting out of some of these cookies may have an effect on your browsing experience.
Necessary Always Enabled
Necessary cookies are absolutely essential for the website to function properly. This category only includes cookies that ensures basic functionalities and security features of the website. These cookies do not store any personal information.
Non-necessary
Any cookies that may not be particularly necessary for the website to function and is used specifically to collect user personal data via analytics, ads, other embedded contents are termed as non-necessary cookies. It is mandatory to procure user consent prior to running these cookies on your website.
SAVE & ACCEPT
174 shares