Traditional Beef Goulash guláš is cooked in a cast iron kettle pot or cauldron over a fire. Cooking Goulash Soup over a fire adds an authentic smokey flavor, it's worth the extra effort. However, of course this recipe can be easily made in a large stockpot on your stove.

This is the original dish of Hungarian herdsmen, and is usually made with beef (and all parts of beef were used). A classic shepherd's stew everyone loves.

Why You'll Love This Recipe

There are many variations of Goulash throughout central Europe, and even western variations. Some are more like stews, some like sides, and others more like soups. American Goulash isn't Goulash at all as it's made with ground beef and macaroni. Variations are made in every home differently and across the former Austro-Hungarian empire, from Italy to Poland.

How to Make Hungarian Goulash

Csipetke are Hungarian pinched noodles that are usually dropped into soups or stews. Like tiny pinched pieces of pasta, between a dumpling and a noodle. These ones are rolled into pea size balls, and are easy to make.

Sometimes it can be hard to find the traditional white Hungarian Wax Peppers that are used in this recipe. They're also used in my Hungarian Stuffed Peppers (töltött paprika). If your green grocer doesn't sell them, try a Farmer's Market. Alternatively, you can substitute with other peppers or mix and match them for heat.

There are different types of Paprika, and this recipe needs an authentic Hungarian Paprika. Trust me, there is a difference! Try to buy one from Hungary for best flavor!

Can I Make Hungarian Goulash Soup Ahead of Time?

Yes, just follow the instructions and allow to cool. Keep in the fridge for 3 or 4 days. Re-heat on the stove before serving.

What cut of meat is best?

Chuck Steak is often used for Goulash. It's tasty and affordable. It's easy to buy a Chuck Roast and cut the pieces into cubes. Chuck is also called a Blade Roast.

How to Thin Goulash?

As the soup simmers on the stove, much of the broth evaporates. Add more water or beef stock to your soup to get the consistency right.

Can you Freeze Goulash?

Yes! As this is a large recipe, you will likely have leftovers! Allow to cool and freeze for up to 3 months. Thaw in the fridge overnight before re-heating. 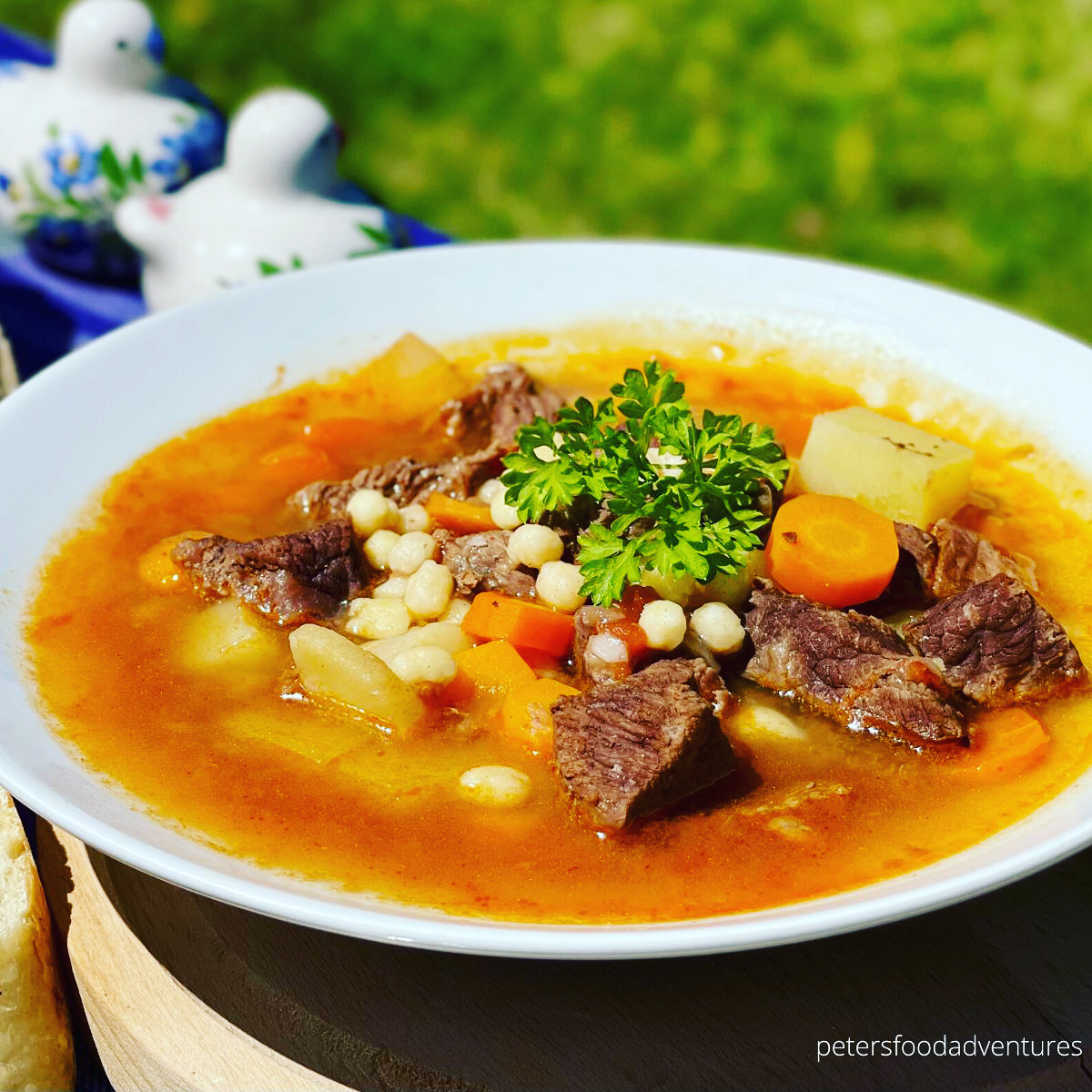 This website uses cookies to improve your experience while you navigate through the website. Out of these cookies, the cookies that are categorized as necessary are stored on your browser as they are essential for the working of basic functionalities of the website. We also use third-party cookies that help us analyze and understand how you use this website. These cookies will be stored in your browser only with your consent. You also have the option to opt-out of these cookies. But opting out of some of these cookies may have an effect on your browsing experience.
Necessary Always Enabled
Necessary cookies are absolutely essential for the website to function properly. This category only includes cookies that ensures basic functionalities and security features of the website. These cookies do not store any personal information.
Non-necessary
Any cookies that may not be particularly necessary for the website to function and is used specifically to collect user personal data via analytics, ads, other embedded contents are termed as non-necessary cookies. It is mandatory to procure user consent prior to running these cookies on your website.
SAVE & ACCEPT
163 shares