Delicious Eggnog Waffles is the perfect breakfast for Christmas morning. Easy to make with creamy eggnog and nutmeg with a hit of vanilla. Crispy and golden, topped with fresh whipped cream and maple syrup, Christmas done right!

Everyone loves waffles, and this Eggnog Waffles recipe is the perfect Christmas morning breakfast! I love eating them with a pat of butter and pancake syrup. Other people add cinnamon whipped cream, or with homemade Dulce de Leche Caramel. Christmas Waffles are sure to be a family favorite.

Where Did Waffles Come From?

Waffles are eaten all over the world, and are especially popular in Belgium. There are many different types of waffles. Some recipes use leavened dough, some use baking powder, and others baking soda. This is an American style of waffle, which is a bit thinner and denser than Belgian waffles.

The word 'waffles' first appeared in the English language in the 1700's. It came from the Dutch word wafel. That came from the word Wafele which was used in the 13th century. These words came from the French word Walfre from the 1100's, which has origins meaning honeycomb cake. This Eggnog Waffles recipe is an American invention, as eggnog is very popular there at Christmas time.

How to Make Waffles

First of all you need a good quality waffle iron. You don't need to spend a lot of money on a waffle iron, however, usually the more money you spend the better the cooking quality will be. What I mean by that, is that cheap waffle irons tend not to cook waffles evenly. I also prefer a deeper waffle irons to make thicker waffles. You decide which waffle iron I best for you!

Eggnog Waffles are easy to make, mixing a batter similar like you would make for pancakes. You don't need to buy eggnog waffle mix, you probably have all these ingredients at home in your pantry. Just whisk together the ingredients and you're ready to pour into the waffle iron. You can use a hand mixer to make sure there are no lumps in the batter and the sugar is dissolved. You can even make your own non-alcoholic homemade Eggnog for this recipe.

I always add a bit of extra nutmeg to this eggnog waffle recipe. This keeps the eggnog flavor stronger when mixed with the flour. You could substitute cinnamon if you don't have nutmeg. The raw sugar could be substituted with brown sugar. I find that raw sugar is a happy medium between white sugar and brown sugar, and doesn't overpower the recipe.

Can Waffles Be Made Ahead of Time?

Ok, this is the clincher, I'm going to say No and Yes. Many people say that you can pre-make waffles and even freeze them. Just pop them into the toaster and you are ready to go. Homemade waffles aren't Eggo Waffles, and they don't taste the same to me when frozen. While it is a time saver, reheated Eggnog Waffles always taste a bit rubbery to me. I love waffles freshly made and crispy. For Christmas morning breakfast, if you have a crowd of people, it's best to use two waffle makers to feed people faster!

A delicious Christmas morning breakfast your whole family will love. This Eggnog Waffles recipe is so easy to make, crispy and golden on the outside, and soft on the inside. Delicious down to the last bite! Bon Appetit! Приятного аппетита! 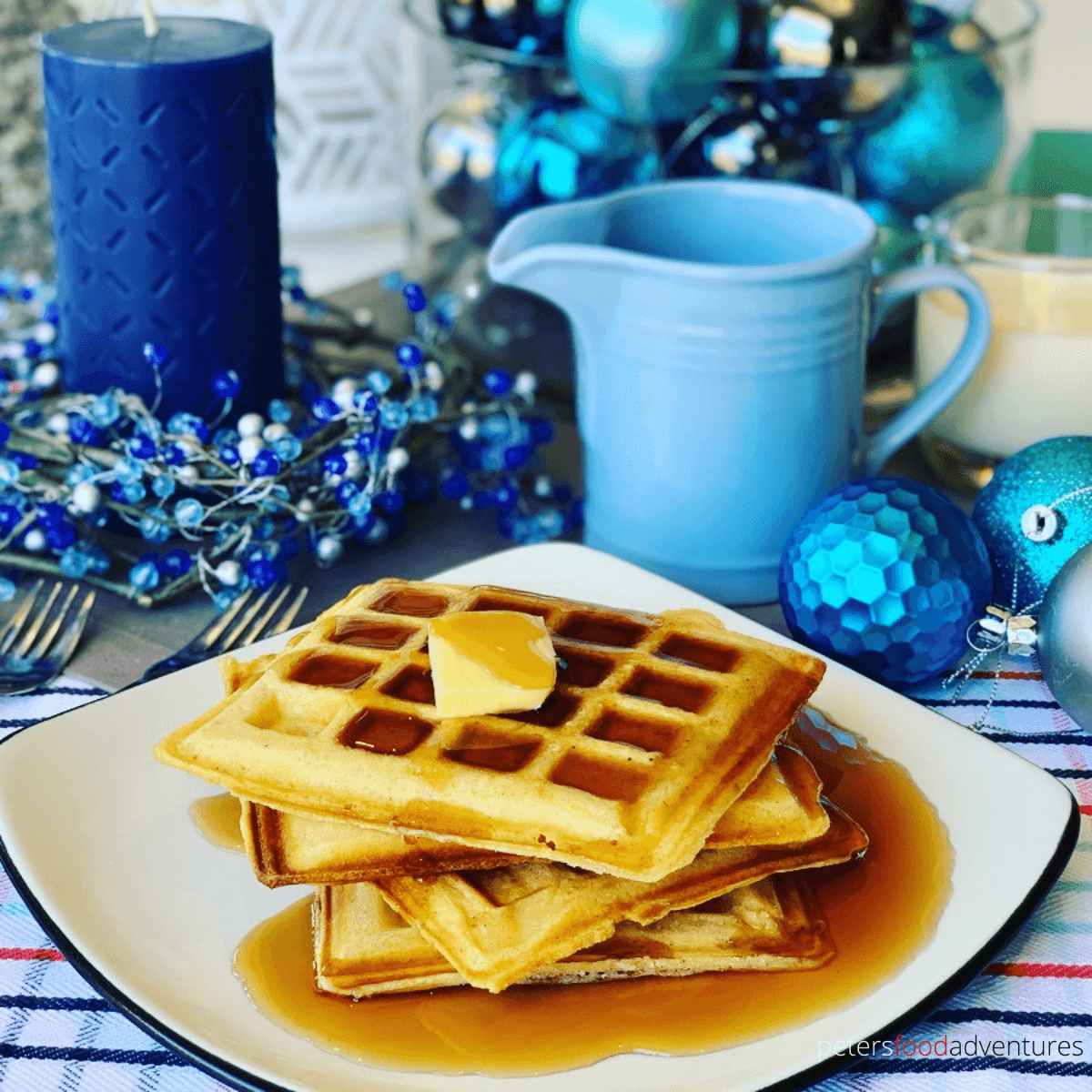 This website uses cookies to improve your experience while you navigate through the website. Out of these cookies, the cookies that are categorized as necessary are stored on your browser as they are essential for the working of basic functionalities of the website. We also use third-party cookies that help us analyze and understand how you use this website. These cookies will be stored in your browser only with your consent. You also have the option to opt-out of these cookies. But opting out of some of these cookies may have an effect on your browsing experience.
Necessary Always Enabled
Necessary cookies are absolutely essential for the website to function properly. This category only includes cookies that ensures basic functionalities and security features of the website. These cookies do not store any personal information.
Non-necessary
Any cookies that may not be particularly necessary for the website to function and is used specifically to collect user personal data via analytics, ads, other embedded contents are termed as non-necessary cookies. It is mandatory to procure user consent prior to running these cookies on your website.
SAVE & ACCEPT
410 shares