There's a secret why this Bread Bowl Clam Chowder tastes so good. It's made with real clams! An authentic clam chowder that's still easy to make, with potatoes, bacon and fresh thyme.

I first tried Clam Chowder in San Fransisco at Pier 39, served in a bread bowl. I was hooked! Once you try real clam chowder, you'll never go back to canned soup! Thank goodness this recipe is so easy to make!

Traditionally, Clam Chowder originated in the Eastern United States. There are many variations and recipes.

What Clams Best For Clam Chowder?

Depending where you live in the world, will depend on what clams that are available. You can use any clams you can get your hands on. Don't get hung up on the right variety of clams to use, any clams will work great in this recipe.

Can I Use Frozen Clams?

Yes, frozen clams work great in this recipe. Fresh seafood is always best to use, but not always available, and can be expensive. Not everyone lives near the ocean where they can dig for fresh clams.

How to Make Clam Broth

Making Clam broth is super easy. All you need is 2 lbs/1kg of clams and 6 cups of water. Bring to a boil and simmer for about 15 minutes. If a clam hasn't opened, throw it away. Strain through colander lined with a cheesecloth. Remove the clam meat and you're ready to go!

What Type of Bread for Bread Bowl Clam Chowder

Traditionally, Bread Bowl Clam Chowder is served in a round, personal size, sourdough bread loaf. Ideally, the bread bowl should have a crunchy crust and a chewy centre. However, you can use most round bread buns like a crusty loaf. Just don't cut the bowl too thinly from the edges, so the bowl holds it's shape.

How to Cut Bread Bowl

How To Eat A Bread Bowl

Very carefully. It can be messy to eat your bread bowl, especially when there is still soup inside. Some people eat the soup first, then eat the bread bowl. It makes more sense to me to eat your bowl while enjoying your soup. As you are eating your soup, and the height of soup drops, tear or cut bread starting from the top of the bowl. As you finish your soup, your bowl should be at least half way eaten.

Traditional New England Clam Chowder is usually made with Salt Pork. It's a fatty, salted pork belly which resembles uncut side bacon. It is not smoked like bacon. Usually the fat is rendered, then the onions are cooked in this pork fat for flavor.

So, what's the controversy? Salt Pork is hard to find around the world, and even in the United States. Naturally, most recipes substitute with bacon. This offends New England Clam Chowder purists. I say Po-tay-to, Po-tah-to. Use the ingredients that are available to you where you live and enjoy this tasty soup.

Many Clam Chowder recipes use canned clams and clam juice when making clam chowder. Of course, real clams taste better I think, but you can substitute with canned clams. Add 3 cans (6.5 oz) of clams with 4 cups of vegetable or fish broth as your soup base.

Final tip: the wine is optional, but I love what it adds to the recipe. Everyone will love eating this creamy Bread Bowl Clam Chowder, San Fransisco style. Perfect for lunch or dinner. Bon Appetit! Приятного аппетита! 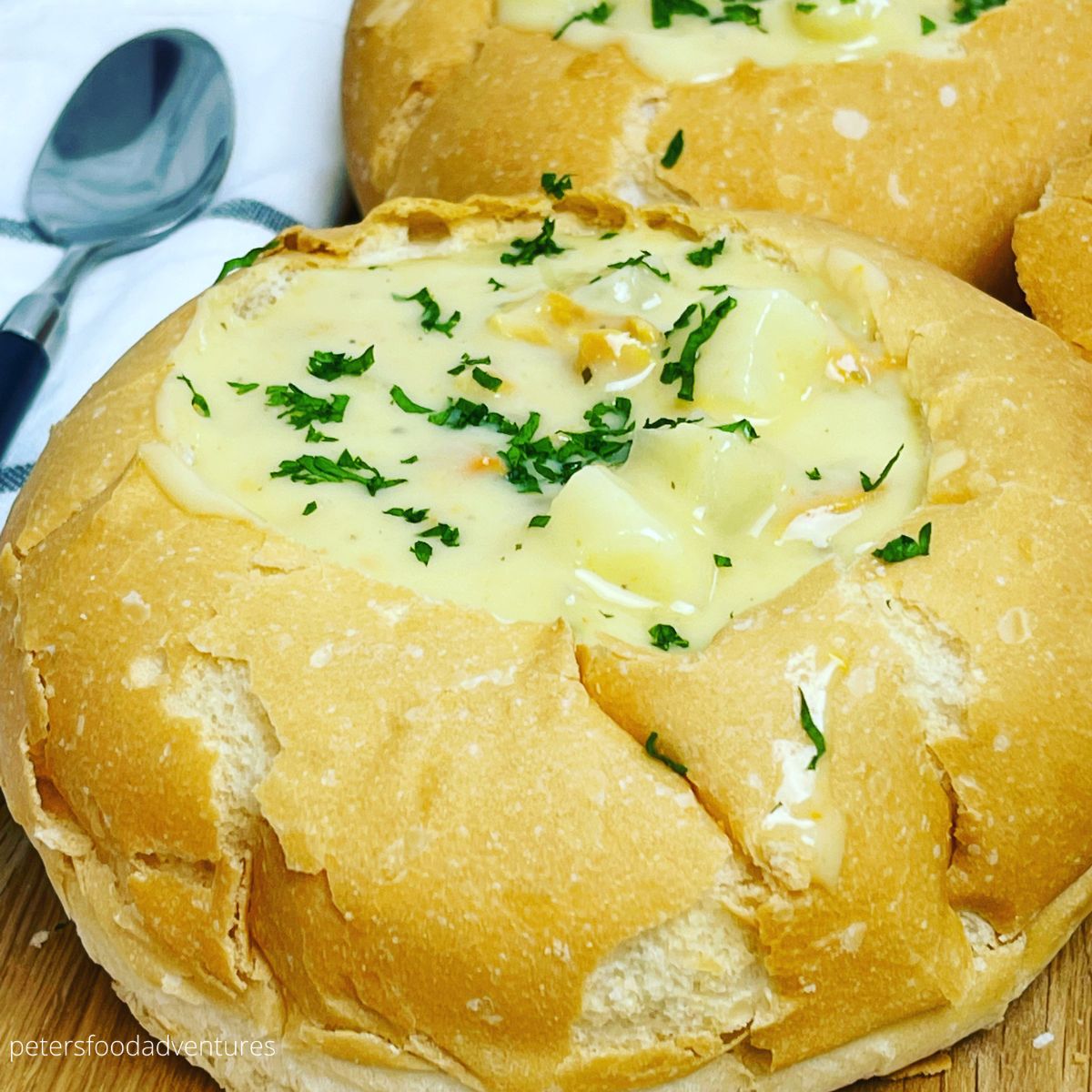 How to Make Clam Chowder

This website uses cookies to improve your experience while you navigate through the website. Out of these cookies, the cookies that are categorized as necessary are stored on your browser as they are essential for the working of basic functionalities of the website. We also use third-party cookies that help us analyze and understand how you use this website. These cookies will be stored in your browser only with your consent. You also have the option to opt-out of these cookies. But opting out of some of these cookies may have an effect on your browsing experience.
Necessary Always Enabled
Necessary cookies are absolutely essential for the website to function properly. This category only includes cookies that ensures basic functionalities and security features of the website. These cookies do not store any personal information.
Non-necessary
Any cookies that may not be particularly necessary for the website to function and is used specifically to collect user personal data via analytics, ads, other embedded contents are termed as non-necessary cookies. It is mandatory to procure user consent prior to running these cookies on your website.
SAVE & ACCEPT
285 shares