Aelplermagronen or Swiss Mac and Cheese recipe is a heartwarming comfort food, popular high in the Swiss Alps. Also called Alpine Macaroni, enjoyed for hundreds of years, loved both by parents and children! An easy recipe to make, perfect for lunch or dinner!

There are are a few differences from American style Mac and cheese and Aelplermagronen. This Swiss dinner recipe uses grated Swiss Cheese as it's cheese sauce, super easy. It's not made with a roux as a cheese base, like my Pumpkin Mac and Cheese recipe. The other difference (other than Swiss Cheese) is the addition of sliced potatoes, bacon, and it's served with apple sauce. A really an easy recipe to make, an awesome carb overload.

What's in Swiss Mac and Cheese?

What type of Pasta for Aelplermagronen

There is a specific pasta that's used when you make Aelplermagronen. It's a straight, tube egg pasta called Älplermagronen specifically sold for this recipe. However, it can be hard to find, so you can substitute with any tubular pasta shape available. I used Penne pasta or Pennette which is a thinner tubed pasta.

Swiss Mac and Cheese with Applesauce

Aelplermagronen is usually served with apple sauce, but sometimes people serve with dried apple pieces instead. My kids love the addition of apple sauce to this recipe, it adds a sweetness that you can either enjoy with your Swiss Mac and Cheese, or eat after as a dessert. I can't seem to decide which way I like to eat it better. You'll need to decide for yourself!

Some people layer the cooked potato and and pasta in a casserole dish that's cooked in the oven, like a Swiss pasta bake. However, that wasn't the intended original way of enjoying this rustic recipe. Like any recipe, there are many variations of how you can make it.

You can use only one pot when cooking this recipe, but it will add extra time, as you need to cook the potatoes and pasta separately. For a quicker cook time, cook the potatoes and pasta in separate pots, and mix together in one large pot when ready to mix together. I love lots of bacon and onion, and sometimes just mix it all through in the pot, instead of garnishing it on top.

My aunt who's from Switzerland introduced me to many different Swiss recipes that I haven't tried before. My favorite recipe from Switzerland  is her Swiss Cheese Fondue. It seems that the Swiss don't get many things wrong, I'm sure you're gonna love this recipe! Check out these other easy dinner recipes.

The ultimate comfort food, a classic from the Switzerland. Macaroni, potatoes, caramelized onions, bacon with Swiss cheese, served with apple sauce. Your family will love this recipe! Alplermagronen Swiss Mac and Cheese with Bacon and Potatoes 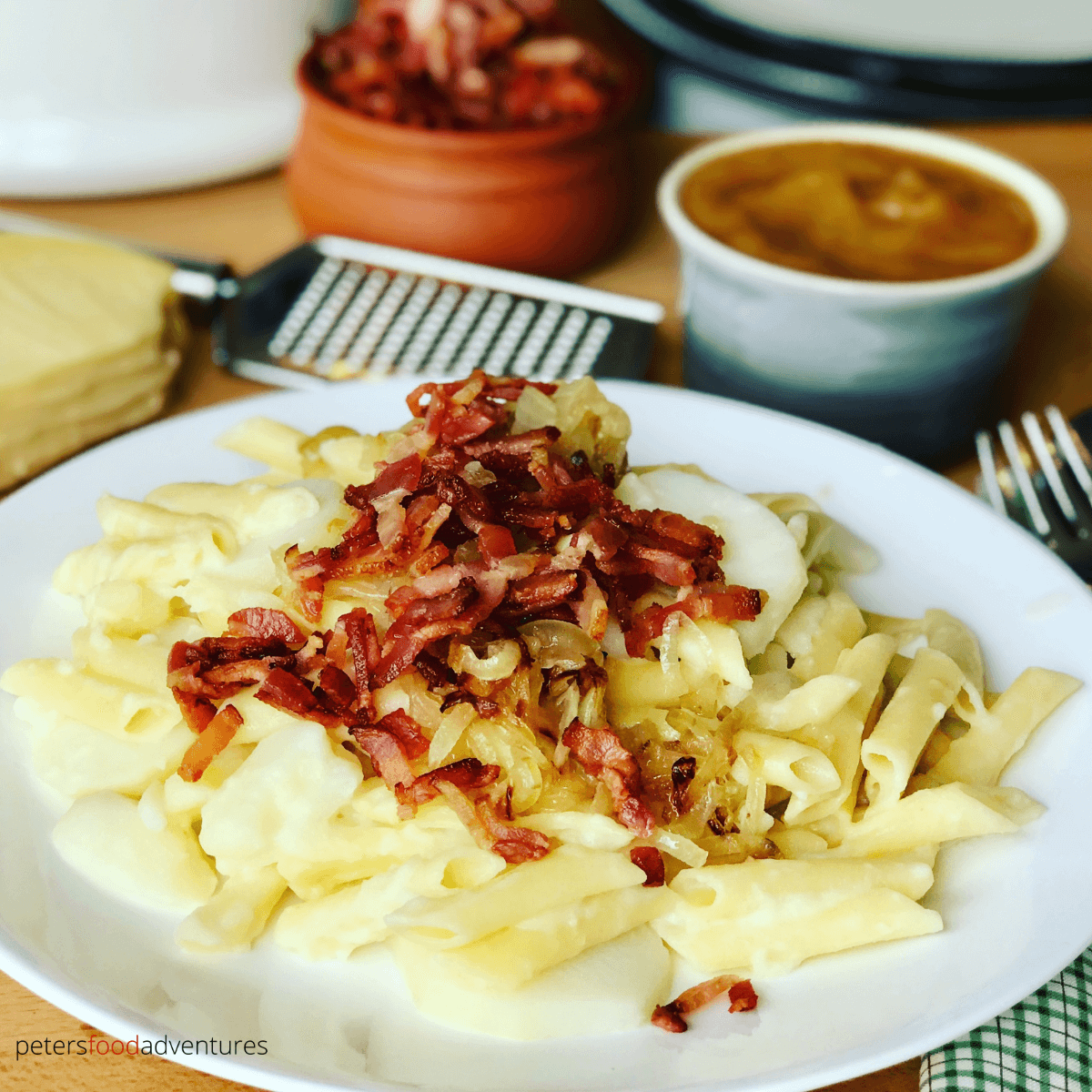 This website uses cookies to improve your experience while you navigate through the website. Out of these cookies, the cookies that are categorized as necessary are stored on your browser as they are essential for the working of basic functionalities of the website. We also use third-party cookies that help us analyze and understand how you use this website. These cookies will be stored in your browser only with your consent. You also have the option to opt-out of these cookies. But opting out of some of these cookies may have an effect on your browsing experience.
Necessary Always Enabled
Necessary cookies are absolutely essential for the website to function properly. This category only includes cookies that ensures basic functionalities and security features of the website. These cookies do not store any personal information.
Non-necessary
Any cookies that may not be particularly necessary for the website to function and is used specifically to collect user personal data via analytics, ads, other embedded contents are termed as non-necessary cookies. It is mandatory to procure user consent prior to running these cookies on your website.
SAVE & ACCEPT
458 shares