I want to say that everybody loves homemade Eggnog during the holidays, but I will only be corrected. There are people out there who don't love eggnog because it's too eggy. Others don't to use uncooked eggs, while others hate the mixture of spices. I fall firmly into the 'love eggnog' during Christmas holidays. It's even tastier when homemade!

I couldn't imagine a Christmas without eggnog. When we moved to Australia, it wasn't as popular here in the supermarkets as it was back in Canada. Although it's more commonly found here now. Store-bought eggnog is easy and available, however homemade tastes better and is thicker. Plus it's a great talking point if you are serving it for company.

I've love eggnog ever since I was a child, and it was obviously the type without alcohol! Every Christmas we would drink eggnog. I have great memories from my childhood. So it's something that I've made at home now for my family. For an adult version, just add traditional alcohol like dark rum or a bourbon.

There aren't too many variations out there when making eggnog. They all consist of eggs, milk, cream, cinnamon, nutmeg and vanilla. Some recipes have added maple syrup, but I think that changes the entire recipe flavor.

I've discovered Vanilla Bean Paste, and use it for all my vanilla needs. Traditionally you would use a vanilla pod and scrape out the tiny beans and allow to pods to infuse like the cinnamon. I find the natural vanilla pods are expensive and sometimes hard to find. Imitation vanilla extract doesn't taste the same. So the Vanilla Bean paste works perfectly and is quick and easy. You won't go back to another vanilla when flavoring milks or whipping creams or cream cheese. You can easily buy it on Amazon.

When you make it at home, you control the amount of spices and flavours that you like. This recipe is quite sweet and I wouldn't add any more sugar. If you like it a big less sweet, just use ½ cup of sugar instead.

Is Homemade Eggnog Safe to Drink?

Like all things, you need to be careful. All the store-bought eggnogs have gone through a pasteurization process and are safe to drink. Salmonella is the fear from consuming raw eggs. Caesar Salad Dressing is also made from raw eggs, and I have never had an issue. But that doesn't mean that you won't! It's safest is you take your eggs through a pasteurization process. Some stores sell pasteurised eggs or you can find recipes online how to do it.

If you are serving homemade eggnog to someone who has a compromised immune system, you may consider heating your  eggnog until its cooked. In the recipe below, just heat it at step 3 when all the eggnog mixture is combined together. The addition of alcohol is thought to kill any bacteria, but that's not guaranteed. So if you are worried and want a safer eggnog, simply heat it through, but it will add to your cooling time. I hate waiting and want to drink it ASAP!

You're going to love this creamy homemade Eggnog recipe. Infused with cinnamon, nutmeg and vanilla bean paste. Perfect for the holidays, you're whole family will love this non-alcoholic treat. Bon Appetit! Приятного аппетита! 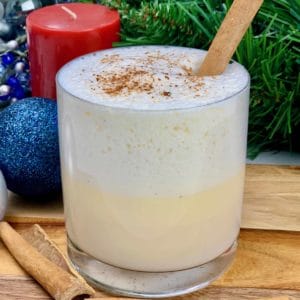 To make this an alcoholic drink, add 1 cup of rum or bourbon before cooling the eggnog in the fridge. Keep refrigerated and use up within 2-3 days.
Keyword Eggnog Recipe, Homemade Eggnog