Beef Piroshki (Жареные пирожки) are a fried Russian hand pie, or meat pie. Simple, like an empanada. A favorite Russian snack stuffed with beef and onion. A Russian comfort food, popular across the former Soviet Union.

There are many variations of fried meat pies across many cultures. Hand Pies you'd recognize are known as Samosas, Empanadas, Belyashi or Pasties. Similarly across Europe, there are different versions of these hand pies. In Greece, they're known as Piroski. In Latvia as Piragi. Finland has Karelian Pasties. Iranians enjoy Pirashki. The Volga Germans introduced Bierocks to the Americas. Variations of Piroshki are made in Armenia, Azerbaijan, Ukraine, Mongolia, Kazakhstan and across Central Asia.

What do you Stuff Inside?

They can be stuffed with many different ingredients. They can also be baked in an oven, for a healthier version of a hand pie. Common fillings are;

Dough can be prepared using a bread maker's dough cycle. It's such an easy way to prepare yeast dough. Drop all the ingredients in, then press the dough setting, and you have yeast dough ready to go in 90 minutes! I bought a bread maker just so I can make easy yeast dough.

However, not everyone has a bread maker, and I've updated my recipe to include the traditional method of making Piroshki dough. Either method is fine, use your preference. The bread maker dough recipe is here.

If you want to make a more traditional Yeast Dough Recipe, watch the recipe below! Not everyone has a bread maker, and it's easy enough to make the dough from scratch, the traditional way.

Popular Piroshki Recipes on my Site

Can You Freeze Piroshki?

Usually I make 2 batches of dough, as I can double the recipe. I figure after all the work to make Piroshki, I want to save some for later! It's perfectly fine to freeze them. Just microwave to heat them up when you're ready to eat. They're the perfect snack for the kids after school.

When frying Piroshki, make sure you place them seam side down to fry in the oil first. In the photos, you will see that I made some by sealing the edges with a fork. That's not the usual way they're made, but my kids were helping me and it was easier for them. Otherwise the seam is usually in the middle of piroshki.

Traditionally Piroshki are usually eaten with sour cream. I loved always eating them with ketchup, because all kids love ketchup! Everyone loves eating Piroshki, and this recipe is sure to be a family favorite. Bon Appetit! Приятного аппетита! 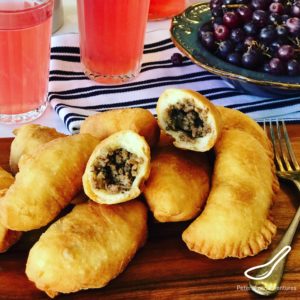