I love a freshly baked, Classic American Apple Pie, preferably baked in a deep dish. I especially love the American style cinnamon spiced apple pie recipes like I grew up with. It's even tastier served 'a la mode' with vanilla ice-cream.

Can You Use Normal Apples For Apple Pie?

Of course you can! There are people who claim certain apples varieties must be used for apple pies. At the end of the day, it's up to you and your tastebuds. Granny Smiths are more tart, so I tend to avoid using them. Living in Western Australia, home of the Pink Lady Apple, that is my favorite apple to use. Otherwise, use what's plentiful and in season.

Growing up in the Okanagan Valley, which was predominantly apple orchard country, there was always plenty of apples in the autumn. We ate lots of McIntosh, Gala and Spartan Apples. Deep Dish Apple Pie was always on the menu.

We had so many apples from our trees that we would get them freshly squeezed to make cloudy apple juice. As a kid, I never wanted homemade apple juice but always wanted the clear store-bought apple juice! How times have changed! We also made homemade spiced hot apple cider. Apples were such a big part of my growing up!

This is Where I Offend Aussies

Moving to Australia, the apple pies that I've had here have been pretty bland. Sorry to offend any Aussie bakers, but I guess it's so different from what I'm expecting. The typical bakery apple pie filling recipes here taste like plain unsweetened stewed apples inside a pie (which must be loved by Aussies).

Australians don't use as much cinnamon, maybe its cultural to North America to use lots of cinnamon and spices. I think I'll just chalk it up to cultural differences. It's not a wrong way to make apple pie, just not the flavor I thought was universal. Therefore I make my own American Apple Pie to remind me of the pies of my childhood. It's funny how some food memories are just in-grained in you.

Making shortcrust pastry is quick and easy, however many people prefer to buy pastry in the freezer section of the supermarket. It's always ready to be thawed and used, and is quick and easy. This speeds up the recipe prep time. All you need to do is buy the apples, peel and slice, season and bake. If you want to make it from scratch, I have included my shortcrust pastry recipe.

When covering the apple pie, you can use a single pastry sheet with a hole cut in the middle to let the juices out. However I think a lattice top pie looks much nicer, and only take a few minutes longer to make. If you don't want to use short cut pastry, check out my Russian Blueberry Pie which uses a sweet yeast dough for the pie. And if all this is too time consuming for you, try making an easy Sharlotka Apple Cake with only 5 ingredients. Another tasty apple recipe that is so easy to make!

I love the mixture of baked apples with brown sugar, cinnamon and spices. It just takes me back to my childhood and reminds me of autumn and Thanksgiving. American Apple Pie, a comforting fall treat, perfect with a cup of tea. Bon Appetit! Приятного аппетита! 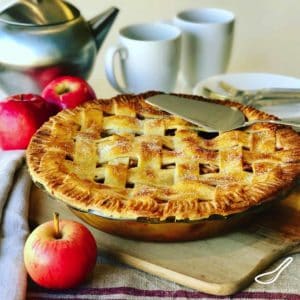 *Alternative measurements for the butter is ¾ cup of chilled butter, or a stick and a half of butter, as oz. or grams are too difficult to work out. You can substitute Pumpkin Pie Spice instead of the cinnamon spices in the recipe.
Keyword American Apple Pie

This website uses cookies to improve your experience while you navigate through the website. Out of these cookies, the cookies that are categorized as necessary are stored on your browser as they are essential for the working of basic functionalities of the website. We also use third-party cookies that help us analyze and understand how you use this website. These cookies will be stored in your browser only with your consent. You also have the option to opt-out of these cookies. But opting out of some of these cookies may have an effect on your browsing experience.
Necessary Always Enabled
Necessary cookies are absolutely essential for the website to function properly. This category only includes cookies that ensures basic functionalities and security features of the website. These cookies do not store any personal information.
Non-necessary
Any cookies that may not be particularly necessary for the website to function and is used specifically to collect user personal data via analytics, ads, other embedded contents are termed as non-necessary cookies. It is mandatory to procure user consent prior to running these cookies on your website.
SAVE & ACCEPT
1855 shares