Everyone loves a good salad, and this Creamy Cucumber Salad with Sour Cream will not disappoint! Mom always made this salad using fresh cucumbers picked from the garden. It's one of my favorite summer salads we make every year.

This recipe is of Polish origin called Mizeria, which literally translates to misery. It sounds terrible, let's eat Misery Salad, don't let the name mislead you! Mizeria a delicious, but basic poor man's salad, using sour cream and cucumbers as the base. Some variations add dill and onions, which is my favorite way to eat this. This Sour Cream Cucumber Salad is similar to Russian Radish and Cucumber Salad. If you love radishes, check it out.

What Type of Cucumbers Are Used in Mizera?

I use Long English Cucumbers for this recipe because they are readily available in supermarkets. Here in Australia, we have Lebanese Cucumbers which also work well. However, if you can find them, use a common Eastern European Pickle Cucumber. It's more of the traditional cucumber that's been used in this recipe. I sometimes find them at farmer's markets. You might need to peel the skin from those cucumbers if they are bitter. That's why Long English are easier. It couldn't be easier to make, especially using fresh cucumbers from your garden.

Well this is the easy part. Just thinly slice it all up, mix and serve. Some people like to use a mandolin slicer when cutting the cucumbers, but I think the slicer is just another thing to wash up afterwards. I cut the cucumbers in half lengthways, then thinly slice them.

I use a sweeter white onion, or even a red onion, as I prefer the milder taste in a salad. However, as the salad is called misery, you can use the sharpest onion you like! Plus the sour cream will help mellow out the bite in the salad.

The final ingredient that can't be missed is fresh dill. A vital ingredient in Eastern European foods. If fresh dill isn't in season, they sell it in herb tubes in supermarkets. I mix in at least a teaspoon of the tube dill with the sour cream to ensure it's evenly mixed. All that's left is to add a bit of vinegar, salt and pepper and your salad is done!

Can You Make Mizeria in Advance?

This is a Yes and No answer! You can prepare the ingredients in advance, but just don't salt or dress the cucumbers with sour cream. If you salt in advance, it will release the liquids. If you dress it with sour cream, it will become soggy. It's best made and served right away. Some people add salt the cucumbers to allow to juices to release, then squeeze it out. I find that this adds unnecessary time to an easy recipe. Plus, I think nobody likes a soggy salad, crispy creamy cucumbers are the tastiest!

Other Slavic Salads You Need To Try!

The shared history of Slavic Eastern European nations also extends to the foods we all enjoy across our cultures (pre and post Soviet). A tasty side dish or summer salad at your dinner table. I love Eastern European cooking. This Creamy Cucumber Salad or Mizeria, is a staple on my summer table (or when cucumbers are on sale!). Bon Appetit! Приятного аппетита! 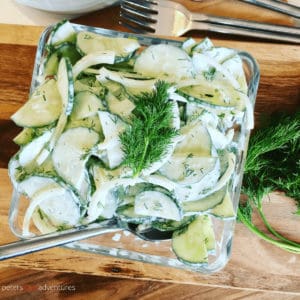 This website uses cookies to improve your experience while you navigate through the website. Out of these cookies, the cookies that are categorized as necessary are stored on your browser as they are essential for the working of basic functionalities of the website. We also use third-party cookies that help us analyze and understand how you use this website. These cookies will be stored in your browser only with your consent. You also have the option to opt-out of these cookies. But opting out of some of these cookies may have an effect on your browsing experience.
Necessary Always Enabled
Necessary cookies are absolutely essential for the website to function properly. This category only includes cookies that ensures basic functionalities and security features of the website. These cookies do not store any personal information.
Non-necessary
Any cookies that may not be particularly necessary for the website to function and is used specifically to collect user personal data via analytics, ads, other embedded contents are termed as non-necessary cookies. It is mandatory to procure user consent prior to running these cookies on your website.
SAVE & ACCEPT
1283 shares