Teriyaki Chicken marinade is a favorite not only in Japan, but in homes and restaurants around the world. The Teriyaki sauce you buy in the store might taste a bit different from the original Japanese version. But it's so easy to make, you'll never buy Teriyaki sauce again.

You can find Teriyaki sauce for sale in any supermarket. It's most often used as a marinade or as a Teriyaki dip. We love making a Teriyaki Chicken marinade, before we grill our chicken, just like the name suggests!

How to Make Teriyaki Chicken Marinade

Teriyaki Chicken is popular in western countries, usually as a stir fry served with rice. This is an authentic Japanese Teriyaki Marinade recipe, without any strange additions like orange juice or other added sweetness. A real authentic Japanese recipe.

The Teriyaki Chicken marinade only has 4 ingredients;

Japanese Sake as the key ingredient that makes it taste authentic to me. Sake can be expensive, so people sometimes skip it from recipes. You can substitute Sake with Chinese Cooking Wine or Shaoxing, which is a rice wine made from fermented rice. Sake is a bit sweeter than Shaoxing, so you might want to add a pinch more sugar.

The other essential ingredient is Mirin, which is another sweeter type of rice wine. The sweetness of Mirin contrasts perfectly with the saltiness of soy sauce and sake. To make the marinade, just mix all the ingredients together with and you're done. The hardest part of this recipe is waiting for the chicken to marinate before cooking.

How to cook Teriyaki Chicken

When I was in Japan, grilled Teriyaki was everywhere, usually with chicken or fish and cooked over hot coals or a grill. This was one of my favourite meals in Japan, but most of us don't have the luxury of grilling over coals, so a frying pan will do the trick.

Chicken thighs are juicier and more flavorful, and traditionally made with Japanese Teriyaki, but you can use chicken breast (but it will be drier). The Japanese sometimes leave the chicken skin on the thighs, as the crispy skin adds more flavor and texture. I'm using boneless and skinless chicken thighs.

I marinate them in a Ziploc bag for at least 2 hours before cooking, because I like the flavor right through. It's probably more authentic to crispy fry the chicken without marinade, and toss it through the sauce in the last few minutes of cooking. It's up to you, however, I love the marinate the chicken.

You can bbq them on skewers, over a bbq grill, or pan fry on your kitchen stove. The bbq is pretty self explanatory, so this recipe prepares Teriyaki Chicken in a frying pan. This recipe also allows you to make it year round! When frying the Teriyaki Chicken, fry the chicken with a bit of oil, without the extra marinade. After the chicken is cooked and crisps up, add the remaining marinade and cook for a few minutes until the sauce thickens.

How to Serve Chicken Teriyaki

You can serve this recipe over noodles (less common) or usually over white rice with some steamed vegetables. It makes an easy Teriyaki Rice Bowl. Slice some Asian greens in half and steam them for 2 minutes to serve alongside the Chicken Teriyaki. The extra cooked Teriyaki sauce gets drizzled over the whole thing, and sprinkle with some Sesame Seeds. It's that easy to make a healthy dinner for your family.

Bring home a bit of Japan for dinner tonight. This easy Chicken Teriyaki recipe is an authentic Japanese classic, quick to make and sure to be a family favorite. Ready to grill, bbq, pan fry, or add to a stir fry. Bon Appetit! Приятного аппетита! 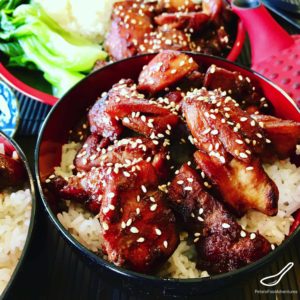 This website uses cookies to improve your experience while you navigate through the website. Out of these cookies, the cookies that are categorized as necessary are stored on your browser as they are essential for the working of basic functionalities of the website. We also use third-party cookies that help us analyze and understand how you use this website. These cookies will be stored in your browser only with your consent. You also have the option to opt-out of these cookies. But opting out of some of these cookies may have an effect on your browsing experience.
Necessary Always Enabled
Necessary cookies are absolutely essential for the website to function properly. This category only includes cookies that ensures basic functionalities and security features of the website. These cookies do not store any personal information.
Non-necessary
Any cookies that may not be particularly necessary for the website to function and is used specifically to collect user personal data via analytics, ads, other embedded contents are termed as non-necessary cookies. It is mandatory to procure user consent prior to running these cookies on your website.
SAVE & ACCEPT
631 shares