This easy Hot Apple Cider Recipe is an easy to make cold weather treat, it's like Christmas in a cup. And very easy to make! It's like a mulled cider, with apple juice steeped in spices. I love apple and cinnamon recipes, whether it's American Apple Pie or my easy Apple Turnovers, all are fall favorites! Come to think of it, this is like a hot apple pie drink!

When it gets cold here, drinking Hot Cider with cinnamon sticks reminds me of the Thanksgiving, Halloween or Christmas season. We used to buy instant hot cider mix at Costco, but as it doesn't exist here in Australia, so I've had to learn how to make it myself. It's so easy, I wonder why I bought the processed stuff before.

You don't need to go to Costco to buy your Hot Apple Cider, it's so easy to make at home! Usually I use cloudy Apple juice, but in the video, I bought regular Costco Apple juice. It only take 10 minutes for the flavors to combine together. Don't skip the ground spices, as they infuse flavour better than the cinnamon stick, but you will need cheesecloth!

You can make a bouquet garni for the spices to make it easier to take the spices out, but it's not as clear as using a cheesecloth to strain the Hot Apple Cider. For a flavor variation, sometimes I use ¾ teaspoon of Pumpkin Pie Spice instead of the cinnamon and nutmeg. It doesn't take long for the flavors to steep into the apple juice. If doubling the recipe, no need to double the spices, just allow to flavors to sit a little bit longer.

If you want an alcoholic Hot Apple Cider, you can add some rum at the very end just before serving, or make it with an alcoholic cider. Some people like adding a little brown sugar, or even caramel sauce to the recipe, but I think Apple juice is usually sweet enough.

So easy to make, all natural and healthier than store bought with unpronounceable ingredients - Easy Hot Apple Cider. Warms me from the inside out. Bon Appetit! Приятного аппетита!

Disclosure: Some of the links below are affiliate links. At no cost to you, I will earn a commission if you click through and make a purchase 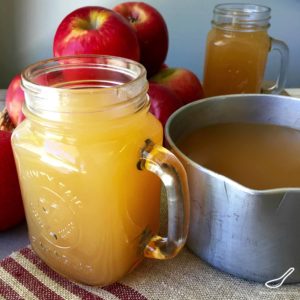 Alternate versions: use ¾ teaspoon of Pumpkin Pie Spice instead of cinnamon and nutmeg. You can also can add a slice orange to the pot for a citrus twist. Optional: add some rum before serving. If doubling the recipe, you don't need to double the spices, it will infuse into the apple juice.
Keyword hot apple cider, mulled apple juice, non-alcoholic apple cider