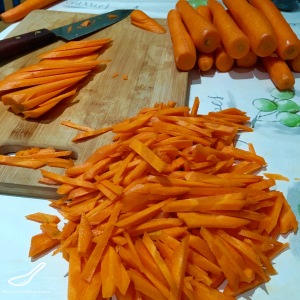 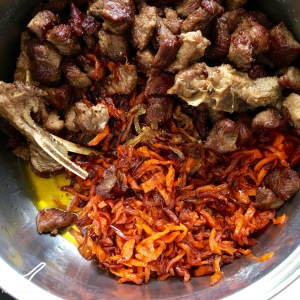 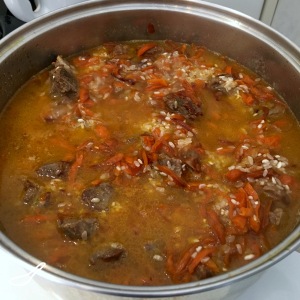 This Palava Pilaf Recipe (Плов) is my favourite Russian comfort food, but is commonly accepted as an Uzbek dish, but all former Soviet Republics enjoy Plov with many variations.

Traditionally, it’s cooked by the man of the house, and is popular for weddings. But we eat it all the time for dinner, usually with dill pickles or with my Salted Pickled Tomatoes which go perfectly with Palava Pilaf. Cumin, coriander and spices are quite common, but my mum never liked heavy spices and stuck to basics.

Why Do We Call It Palava instead of Plov?

My parents were born in North West China (just south of the Soviet Union), right beside Tajikistan, which is where the influence of the word Palava came from. In Tajikistan it’s called Palav (Палав), but Plov is the correct Russian name. Worldwide, there are many versions of Pilaf, known as pilav, pilau, pelau, pulao, pulaav, palaw, palace, palava, plov, palov, polov, polo, polu, kurysh. No one culture really owns this word as there are many names and subcultures to the recipe. I remember someone telling me that Palava isn’t a word, how misinformed they are about how many pilaf recipes there are!

This Palava Pilaf recipe can also be made with dried apricots, raisins, and less commonly with dried cranberries, prunes, and even barberries. As a kid, I absolutely hated eating the raisins in Palava and always picked them out. My sister loved the raisins and mum always included them, maybe it was her way of trying to make me eat more fruit! This is my mum’s Palava Pilaf recipe, but my wife makes Plov a little differently from my mum, which I absolutely love and will post soon.

My mum insists that the rice used must be no larger than medium grain rice, definitely not long grain rice. She actually uses Kokuho Rose Short Grain Rice, marketed as a sushi rice in Australia, and costs a fortune here (as it’s imported from California). Plov is commonly made with long grain rice, it’s your choice. It’s funny how little differences across regions change a dish. Mum’s Palava Pilaf recipe has a really lovely dark colour through the rice, compared to many plov recipes.

The secret to a colourful and flavourful Palava Pilaf recipe is not adding turmeric, cumin or flavours, but it’s ensuring you have plenty of fried carrots and lots of oil. Many Plov dishes can be quite light in colour, and sometimes light in flavour. The flavour is in the fried oil, the colour from the carrots. The trick is to get the balance right, too much oil makes it oily, and not enough oil loses flavour.

So you could make a healthier version of this Palava Pilaf Recipe, skim on the oil and add extra spices, but it wouldn’t taste the same. Russians aren’t skinny, oil free kind of people anyways, why would I try to start that now? Bon Appetit! Приятного аппетита! 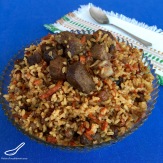 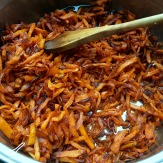 A classic Russian comfort food, easy to make one pot rice recipe, packed with flavor and spices. So easy to make, I can eat the leftovers for days - Palava Pilaf Recipe (Плов рецепт)

Check Out These Related Posts

I started this website as a way to capture the recipes that I grew up with, and pass them onto the next generation. Being world travellers, there are foods from all over the world, but my passion is primarily the Russian foods I grew up with. Read More…