Don't click away! The video says they are the worst Piroshki I have made, but I promise, they still taste amazing!

When I think of piroshki, I don't automatically think of baked blueberry piroshki, but instead think of the savoury fried pirozhki dishes with lots of meat or potato, like my savoury Baked Beef Piroshki recipe or Cabbage Piroshki. But that's not the only variety piroshki out there. Check out the other varieties on my site.

How to Make Sweet Piroshki

This is an tasty baked blueberry piroshki recipe made with a sweet dough which we called sdobnoye testo (сдобное тecтo) . This sweet yeast dough is used in all sorts of baked sweet treats, such as Piroshki with apricots, apples, blueberries, sweet buns, sweet pies and more. This is not the same dough that is used in savory piroshki. It's also not a puff pastry, but a soft yeast dough that is almost universal for all these sweets.

Growing up, mum would use a large mixing bowl, mix the ingredients, the yeast, and the dough would rise, it was such a long process. I often use a Cuisinart Bread Maker, with an amazing dough setting that does all the work for me. It's such a time saver, and I can't mess it up, it just works beautifully! Just throw all the ingredients, in the correct order, into the bread machine, and in 90 minutes, you have an amazing sdobnoye (сдобное) sweet dough, ready to use. I have a video and recipe on how to make traditional Sweet Yeast Dough if you don't have a bread maker.

The other shortcut I am using when making baked blueberry piroshki, is in the blueberry filling. You could use fresh/frozen blueberries like I did in the video, and sugar and some potato flour, as the uncooked blueberries will be juicy. But seriously, I have discovered Duncan Hines Blueberry Pie Filling. Oh my goodness, it's so tasty and ready to use out of the can. I didn't even put it in a pretty bowl, just straight outta the can, perfect for a winter treat! Although fresh is best, especially when blueberries are in season!

You need to be very careful not to overfill the blueberry piroshki with the pie filling, or you will have problems closing them up. If any get on the edges, the pirozhok won't seal up and it gets sticky, but still edible! (as you can see in my photos). There will always be a leaker, even when you take care in making them! So making Blueberry Piroshki can be a bit messy, lopsided like my video, but still it will taste amazing!

Nothing beats the smell and taste of home made baked goods, baked blueberry piroshki are are always a winner at my place. Bon Appetit! Приятного аппетита! 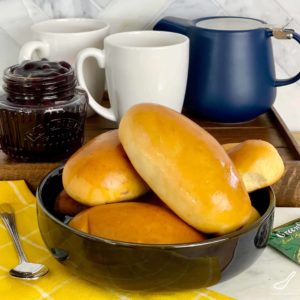