French Dip Recipe with Easy Au Jus, can also be called Beef Dip with Easy Au Jus Recipe. It's an American staple created in Los Angeles from the early 1900's, which 2 restaurants lay claim to, Cole's Pacific Electric Buffet and Phillipe the Original. However its not clear who came up with the original dish, but both restaurants serve slices of roast meat on a bun dipped in au jus drippings.

Nope, It's not even a French dish, and people are divided to the reason why it's called French Dip. Some say it's because of the French baguette bread, others say it's a nod to the background of the chef at Phillipe's. Either way, we will likely never know the full story of this delicious meal. This is one of my favourite sandwiches and boy do I miss being able to go to a restaurant and order this.

They just don't make French Dip here in Australia. Yes, we have roast beef sandwiches, but that's not a French Dip (Beef Dip). So I've learned how to play around with some recipes to recreate this yummy dish a la Peter! Any French Dip recipe isn't complete without the dipping sauce.

What is Au Jus?

Au Jus is pronounced oh-zhoo which in French means with juice - meaning the juices of the cooked meat. This is what we dip the sandwich into, get it wet, bite and repeat. So good! Au Jus is not gravy, or just plain stock, but has a deep rich flavour which complements the sandwich. Originally it was the beef dripping or the juice leftover from the cooking process. I use a consommé as a base to start my flavouring, using plain stock won't taste the same.

Now it usually takes a long time to make roast beef in the oven, and I'm usually time poor. I suppose leftover roast beef would be great for this recipe. There are some recipes which use slow cookers to cook the beef to get the Au Jus, but I'm not a huge fan of slow cookers but maybe that might change in the future. My local deli sells fantastic rare roast beef slices which are a great time saver.

Now it's just about creating a great Au Jus dipping sauce. I also love adding the extra zing of aioli mayo or horseradish mayo which adds an extra level of flavour to your meal. Provolone cheese is also not traditional to a French Dip (Beef Dip), but just tastes oh so good. I especially love it when the cheese is melted under the grill, then dipped into the Au Jus. You just have to trust me, it's amazing!

So you have a few options of how to make a French Dip recipe with Easy Au Jus, the traditional way, or the fancier way with provolone and horseradish mayo. Start making the Au Jus recipe first and while it's simmering, start to organise your sandwich. By the time the sandwiches are grilled and done, your Au Jus is ready for straining and serving. Bon Appetit! Приятного аппетита! 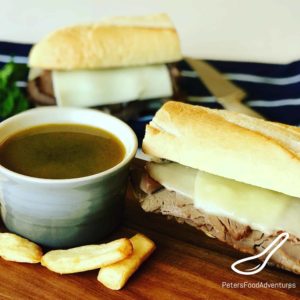