I love this Creamy New England Style Clam Chowder recipe. It's also known as Boston Clam Chowder. Growing up in a Russian household, we never ate creamy clam chowder. We never ate any type of seafood chowder. My mum won't even eat shrimp, as she call them ocean worms! She doesn't know what she's missing!

The first time I ever ate Clam Chowder was from a Campbell's Soup can, and I thought the clam flavor was delicious! It tasted different from the fish soup recipes I tried before, and I love creamy soups.

So imagine when I tried real Clam Chowder made from scratch, I was hooked! I remember trying Creamy Clam Chowder in San Fransisco at Pier 39, served in a sour dough bread bowl. Once you've tried real clam chowder, there is no going back to canned soup! Thank goodness this recipe is easy to make.

The hardest part of this recipe is finding fresh clams! I buy frozen clams and they work great in this recipe, just like fresh clams. Fresh seafood is always best to use, but not always available, and can be expensive. Not everyone lives near the ocean where they can dig for fresh clams.

I always try to use fresh or frozen clams instead of canned. If you are using fresh clams from the beach, remember to wash and scrub them before making the clam broth. But, frozen clams are a thing! So next time you see them in the frozen aisle in the supermarket, buy them to make this recipe.

What Type of Clams to use for Clam Chowder?

Clam Chowder isn't that common in Australia, Campbell's Soup doesn't sell it here. We don't have anywhere near the same varieties of fresh clams that are available in North America, and they aren't as popular here.

We do have Pipis, Vongole, Razor Clams and Cockles, which are all shellfish with a double hinged shell. These are generically called clams. Don't get hung up on the right variety of clams to use, any clams will work great in this recipe.

The wine is optional, but I love what it adds to the recipe. Traditional Salt Pork found in New England Clam Chowder recipes is impossible to find around the world. I did what everyone else does, substituted it with bacon (another salty pork product). 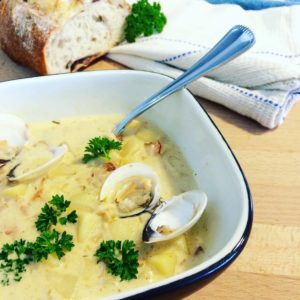