Buckwheat Kasha with Mushrooms is the perfect side dish because it's so healthy! Is buckwheat a superfood? Maybe. It's definitely an ancient grain, eaten for thousands of years. Buckwheat is most commonly eaten in Japanese soba noodles, or as an Eastern European Kasha. It apparently can help lower bad cholesterol, is high in protein, and is low GI.

Russia is the worlds biggest producer of Buckwheat or Grechka (гречка), and it is a Russian staple. Buckwheat is not part of the wheat family at all, therefore it's gluten-free, the name just tricks you! It's actually a seed, and related to rhubarb. It got it's name from a Dutch origin translation 'beech wheat' because it resembles a beech nut seed.

Buckwheat is 'healthy' for us, and like all things that are 'healthy' it tastes like you would imagine 'healthy' to taste like. I haven't always been a fan of buckwheat. As a kid, mum would sometimes make Buckwheat Kasha with Milk for breakfast instead of porridge. I'd put in so much brown sugar to sweeten it up, although I use much less sugar now!

As I get older, and explore healthy foods, buckwheat is on the list. It's now my job to share 'healthy' foods with my children. So how can I enjoy eating it? Buckwheat Kasha with mushrooms is pretty standard Russian food. I think this is a great side dish, think of unprocessed Rice-a-roni. I always have smoked European sausage (kolbassa) in the fridge, or a Danish Salami, so it was a no brainer to add it to this meal. It also tastes great with bacon. After preparing the buckwheat in the recipe below, you can mix in your favorite vegetables. You can also use buckwheat in salads, it's quite versatile.

Sometimes it's hard to find buckwheat groats that have been pre-roasted, so I included instructions how to roast. If you don't roast your buckwheat to make this recipe, your dish will turn out gluggy and not fluffy. Roasted buckwheat tastes better. The packaging should say if it's pre-roasted or not, so it's important to check if you want tasty buckwheat! It will have a bit of a green color if they aren't roasted, as in the above picture.

So here's a buckwheat side dish recipe you can add to your diet. Your heart will thank you for it! Bon Appetit! Приятного аппетита! 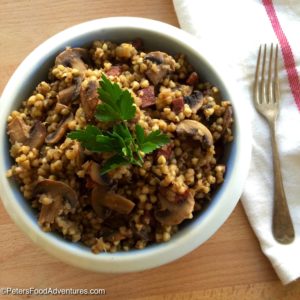